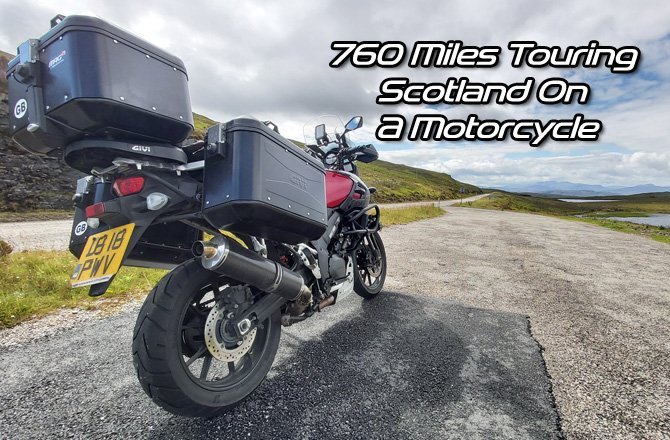 In the past perhaps you have chosen to follow one of the well-known motorcycle routes or completed the famous North Coast 500 (NC500). Some of these routes establish themselves, others – such as the one we were testing – are a mixture of luck, experience and the need to go for a ride.

The motorcycle touring route through Scotland we were testing – along with Bridgestone A41 tyres – is 760 miles long, if we count just the part that is in Scotland, and where ever possible we were avoiding the NC500.

Our idea is that while the camper vans and caravans follow the famous route through Scotland, the motorcycles on our tour will be enjoying themselves in other glorious parts of Scotland.

Having ridden it, the route needs a few tweaks, but overall as a new touring route through Scotland, it works well, especially if you enjoy bends. For a pure sportbike, it may not be the route you are looking for, but any naked or tourer isn’t going to have a problem.

Rocket III, Pan Europeans and some Harleys might not enjoy all of the roads we travelled, as not every road is as perfect as the A92 through the Cairngorms National Park.

A couple of the days need shortening, in time rather than distance. With so many route options available that shouldn’t be too difficult, and after the second test run in late September should be set up for touring Scotland on a motorcycle in 2021.

No matter how much testing is done, there is always that unplanned eventually that has to be addressed. And so, without further introduction, here are a few of the things we learnt from touring Scotland on a motorcycle … this time.

It Isn’t all in Scotland

For many of us, Scotland isn’t just around the corner. When picking your route in and out of Scotland don’t just choose the most direct route.

Just north of Scotch Corner on the A1 is the Northumberland National Park and the A68. The road winds through the National Park and if it has been a while since you connected 40 miles of bends together on a single road, it is an excellent way to prepare for the twists and turns of the roads in Scotland.

On the other side of the country, you have the Yorkshire Dales National Park and the A7 which starts just north of Carlisle and will take you north of the border and into Scotland.

Touring Scotland is going to involve rain and depending on how much rain falls on what day, might require an alternative route.

The truly breathtaking route through the Cairngorms National Park can be equally miserable if the weather turns to custard. Having alternative routes based on the weather takes the pressure off you and the other people on the tour.

Motorways and fast arterial roads aren’t always better in the rain, mainly due to the spray. Yet, progress on tight twisty roads will be slower in the rain, making a long day even longer. Have a couple of route options ready to go and make life simple.

The road surfaces north of Edinburgh are generally excellent. Even the single-track roads were generally devoid of potholes and offered good grip.

If you don’t have confidence in your tyres though, all of the grip you are getting from the surface isn’t going to count for much.

Back in February, we started testing a set of Bridgestone A41s. They were bought with our own money on the advice of Mark from Mobile Bike Tyres who had nothing but good things to say about them.

Then lockdown happened and now those “new” Bridgestone A41 tyres have 4,500 miles on them mainly from town riding while delivering prescriptions.

Nonetheless, the A41s remain as inspiring as they did when new. It doesn’t seem to matter what I ask the Bridgestone A41s to do, they just get on with it.

There are parts of our touring route that involve vigorous cornering activities. Twice we encountered prolonged periods of rain and leaving Fort William the roads were soaked for the first few hours thanks to heavy overnight rain.

Damp patches under trees, single-track roads, motorways and sweeping bends – we had it all and yet the Bridgestone’s just got on with the job and never once gave me anything to think about.

No tyre is perfect, and the Bridgestone A41s do “step” slightly when crossing raised white lines in wet conditions. It is momentary, and every time the Bridgestones settle again just as quickly.

The Bridgestone’s have a couple of millimetres left on them before they will need replacing. No prizes for guessing what I’ll be replacing them with.

When you are focused on making progress and enjoying the bends, it can be easy to miss all of the amazing scenery. The Kinlockewe valley, has to be one of the most photographed parts of the Scottish Highlands, especially when there is a motorcycle involved.

Rumour has it that the exquisite new road surface is thanks to the James Bond film Skyfall who used the road while filming. It certainly makes for an engaging ride to the petrol station and coffee stop at the bottom of the valley.

It is also the one time I was glad I missed the turnoff to the viewing area as it gave me the perfect excuse to turn around and ride the road again.

Regardless of why you stop, do remember to stop and take in some of the stunning surroundings.

Scottoilers are excellent. I’ve fitted them on my last four bikes and I’ll have one on the next – assuming it isn’t shaft drive.

It is perhaps ironic then that the one time I cough up the money for the all singing and dancing X-System electronic Scottoiler – because they are that good – is the first time I have one fail.

As the saying goes, “the lights are on, but nobody is at home”. The power and the indicator lights function, but oil isn’t flowing and so I suspect the pump has gone. Three years, 20,000 miles and three winters, isn’t too bad and compared to all that messing about with chain lube every time it rains.

The lesson learnt with the Scottoiler failing is that shit happens. Don’t bank on something never going wrong, just because it hasn’t in the past. A small can of chain lube in the bottom on my top box would have saved a lot of stops at garages looking to buy some.

Same goes for the very small electrical screwdriver I had to buy to reconnect power to the GPS. Two more additions for the touring tool kit.

Door to door, we covered 1,360 miles touring Scotland on a motorcycle. 760 of those miles were north of the Scottish border.

Even though our first night was on the first-day tourist were allowed to stay, we weren’t alone in getting to Scotland “early”. Four days into our tour of Scotland and the number of motorcycles heading north had noticeable increased.

Sadly for us, by then, we were heading south. It was strange watching the motorcycles fly past in the opposite direction. We knew they were going to have a superb time, exploring the amazing roads and stunning scenery. The desire to turn around and join them was immense.