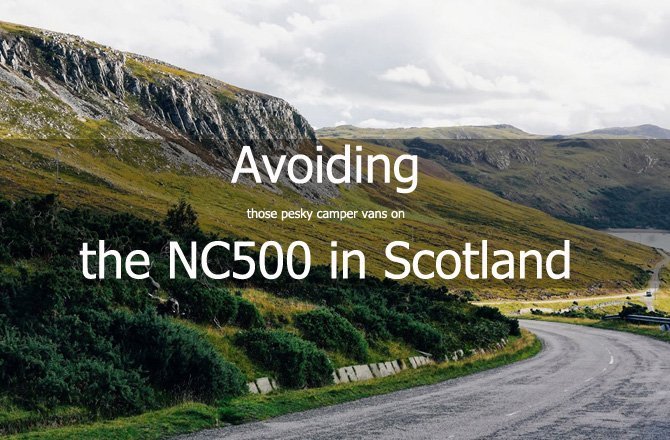 The NC500 route around the highlands of Scotland is a hard thing to ignore. The official route includes numerous fantastic motorcycling roads, so why am I trying to avoid them?

With the COVID lockdown restrictions forecast to ease further from the 15th July 2020, and with some European travel possible, but not being as simple as it was 4 months ago, most of the official NC500 route is likely to be clogged with camper vans and cars, all trying to “get away from it all”

I appreciate that they are merely doing what makes them happy, the same as I will be. The difference is that motorcyclists – hopefully – don’t back up the traffic or wandering across the road because their pillion is pointing out things to look at other than the road ahead.

A few weeks back, I took an educated guess – a seriously wild arse guess is a better description – as to when leisure travel would be permitted. Based on that SWAG I’ve booked a sequence of one night stops through some of the most beautiful scenery that the UK has to offer.

A journey like this is best shared, which will also provide the opportunity to finish off testing the Sena 50S Mesh Intercom and the Bridgestone A41 tyres, fitted back in February.

The Bridgestone tyres have 4,500 miles on them now, over two thousand of which are from town delivery riding. I definitely need to work on the tyre edges to even up the wear.

To ride either our unofficial route or the official NC500 route, we first need to get to the starting point. Arrive at any of the English ports from Europe, or if you live on the eastern side of England, the most obvious route north is on the A1.

The A1 is dull and very similar to motorway travel. However, when the A1 comes close to the town of Darlington – known as Scotch Corner – you can get off the “motorway” and start enjoying the ride.

The A68 is the road we have chosen to move us further north as it runs along the eastern side of the North Pennines AONB (Area of Outstanding Natural Beauty), and then through the Northumberland National Park, where we’ll cross the border into Scotland.

At Melrose we plan to take a short diversion on to the B6374, mainly to break the journey up, and because the B6374 connects with a section of the A7 and a highly enjoyable stretch of bends. We should get 20 miles of enjoyment to repay the time spent on the A1, before arriving in Edinburgh for the first night stop. 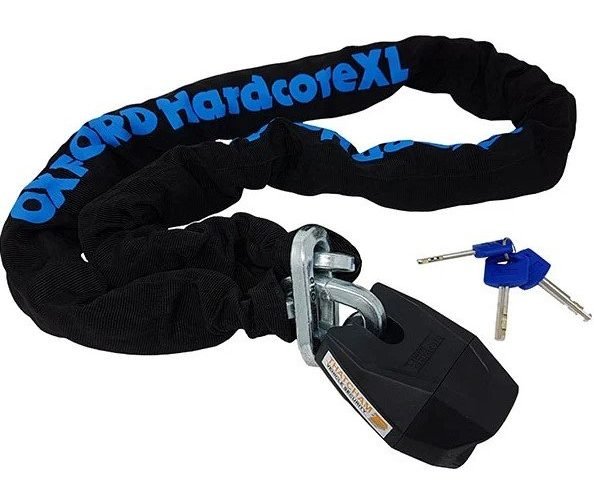 Leaving my motorcycle in an open car park overnight never sits well with me.

One of the first items I look at when booking a hotel is the parking, in the hope that they have somewhere I can secure my motorcycle.

There aren’t many hotels in major cities that give space over to secure parking, and Edinburgh is no exception. Not at the hotel prices, I can afford, anyway. Getting a good nights sleep, therefore, relies on security chains and disk locks.

It is never the same as secure parking, but having an Oxford Hardcore XL 13 Chain and Padlock securing my bike does help soothe my rampant paranoia over having my bike stolen. It is that same paranoia has me put an ABUS Provogue 300 on the front wheel as well.

As to whether any of this helps, is something I’ll never know. Have the scum-sucking bike thieves left my bike alone because of the locks and chains, or are they just not interested in a 4-year-old V-Strom?

I hope I never get the answer to that question.

Are we there yet?

The official NC500 route starts from Inverness, and being in Edinburgh means there are another 200 miles to travel before we can start avoiding the NC500.

Leaving Edinburgh and taking the M90 across the River Forth we will be heading towards Perth and then picking up the A93.

From there it is a two hundred and something mile route twisting and turning through the Cairngorms National Park, arriving at Inverness and the start of the NC500 route proper.

The worries of another night in public parking, however, won’t be following us north. While I was booking the rooms at the highly recommended Whitehouse Biker B&B in Dingwall (just north of Inverness) the owner made a point of mentioning the secure motorcycle parking they have.

Obviously, they are people who understand the motorcyclist’s mindset. Excellent.

If you are wondering will our trip will somehow be downgraded by avoiding the official NC500 route, worry not.

The image above is from the Kinlockewe Mountain Road, perhaps one of the most photographed of the NC500 roads. If the road is as empty as its when we get there, I won’t be complaining. Sadly I doubt it will be, but at least the cross views for overtaking are good.

Having ridden that section of the NC500 route, the rest of our third day is another wonderfully twisting and turning 250-mile ride through equally as spectacular scenery as found on the official NC500 route.

Initially, we’ll be going further north on the A837 until we get to Ledmore, then turning south-west along the A835.

Rather than take the coast road, we’ll be turning inland towards the Wyvis National Nature Reserve, then back out towards the coast, clipping the eastern end of the Isle of Skye bridge. From there we follow the A87 until the Invergarry Junction, where we turn south towards Fort William for the night.

Continuing south from Fort William, we have to cross the natural chokepoint between Glasgow and Edinburgh before returning to open roads and stunning vistas. There is no way to avoid the M8, which runs east-west across Scotland joining the two towns; none that would make an exciting ride, anyway.

Any day on the bike is a good day, and once south of the M8, we will be following the A703 and the A7 all the way to the border with England at Scotsdike.

The planned destination for the fourth night stop is Cockermouth, south-west of Carlisle. The oddly named town is the perfect place to start a ride across the Lake District and Yorkshire Dales National Parks.

As this will be on a Sunday – if everything goes according to plan – it might be the most frustrating of the days. An early start to avoid the weekend escapees, enjoying the countryside from inside their air-conditioned cars, might be the best approach.

Our planned route homeward intersects the A1 just north of York, at which point we have the option to bail out and take the boring way home if we so choose. Alternatively, we can finish off what looks like an enjoyable 5 days/4 nights, on some of Lincolnshire’s well-known motorcycling favourites.

According to MyRouteApp, this will be a round trip of 1,200 miles, with 741 of those miles in Scotland. Hopefully, not too many of those miles will be spent overtaking camper vans.