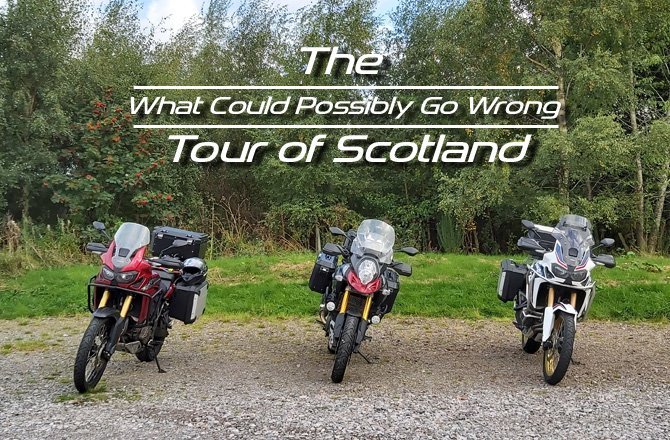 What could possibly go wrong? Three motorcyclists let loose without adequate supervision, on a tour of Scotland.

As this was our second visit, the intention was to ensure the small tweaks made to the tour route were successful and it was now ready to share. Well, that was our excuse for going. Really was just because the riding is so enjoyable.

The route – available on the Touring Routes Page – avoids the North Coast 500 as much as possible and as a consequence should help you avoid the ever-present camper vans.

Each of the routes builds on the day before. The mileage is between 200 and 250 miles per day, with the exception of day one, which is 130 miles from the starting point.

Each route ends at a night stop. Three of them are Premier Inns., which are all the same but also have a pub that serves food, within walking distance.

Our experience of leaving the bikes parked overnight ar Premier Inns has been OK. That said, we do go way over the top with chains and disk locks, plus we chain all the bikes together and “touch wood” we have never had a problem.

The other night stop is spent at a cracking B&B in Conon Bridge, just north of Inverness – The Whitehouse.

We may run this as a guided tour in 2021, but in the meanwhile here is a day by day breakdown. Enjoy.

Every tour has to start somewhere, and I picked the B6275 just west of Darlington. The first day is 130 miles long, the theory being that you are unlikely to live on the B6275, west of Darlington and so will have travelled to get to the starting point.

From there the route travels through the Northumberland National Park, goes past the big stone at the border with Scotland (photographs are compulsory), before taking the Melrose Road towards Edinburgh.

It is a great day’s riding. Nothing too taxing. Small amounts of town riding are required to connect the flowing back roads. The route ends at the Edinburgh A7 (Dalkeith) Premier Inn.

This is the best night stop, but I’m getting ahead of myself. First, you need breakfast which is normally available in the nearby pub. Alternatively, if you exit the Premier Inn car park and turn right, and then turn right at the roundabout, there is a McDonalds a mile along on the road.

To get north of Edinburgh the day starts with a few motorway miles. Forget motorways as you know them. The run on the M90 to Perth is picturesque and typically the traffic is light. Fifty miles to get away from the cities and towns and into the good stuff.

At Perth, you have a decision to make. The route as planned goes through the Cairngorms National Park on one of the best biking roads in the UK. It can, however, be a tough ride if the weather isn’t playing along. On bad weather days, you might want to consider using the A9 to Inverness. It is nowhere near as invigorating a ride, but sometimes it is the better choice.

The ride through the Cairngorms is around 100 miles long, and I’ve never found a petrol station on the route despite one showing on my TomTom Rider. There are several petrol stations in and around Elgin at the north end of the Cairngorms, but it is wiser to fuel up as you leave the motorway at Perth or in Blairgowie.

The route for day two of the tour of Scotland ends at The Whitehouse Bikers Bed and Breakfast in Conon Bridge, a few miles north-west of Inverness.

What makes The Whitehouse a bikers bed and breakfast? Well along with all the normal stuff such as off-street parking, good breakfasts and being run by a Brellin Ross, herself a rider, there is the Dog House.

The Dog House is a place to sit and talk rubbish at the end of the day; eat your evening take away, and even dry damp bike gear using the coat hangers strategically placed over the log burner.

After Brellin’s breakfast at The Whitehouse, it is another morning to think about fuel first.

There are a couple of petrol stations in Dingwall, however, the route will take you away from these and across the Cromarty Bridge. My preferred petrol station is just across the bridge. As you leave the A9 for the B9176, the petrol station – signposted Services – is on your left-hand side.

If I had to pick a favourite day of the tour, it would be this one. All of the days have excellent roads to ride, but if the weather plays along, this day is perhaps the best of them all. Stunning scenery. Roads that are typically those less travelled and there are amazing cakes to be eaten at the Elphin Tearooms.

Fourteen miles after the compulsory cake stop, you pass through Ullapool where there is fuel available, but you might want to hold off on fueling until you have ridden the A832 Kinlockewe Road.

Myth and folklore have it that the new tarmac that starts just after you leave the viewing point, comes courtesy of one of the James Bond films that used that section of road. I’ve no idea if it is true, but it is an outstanding last few miles before stopping for fuel and a break at the bottom of the valley.

The road to Applecross is narrow, mostly single track, and on a busy day in summer can be a pain in the … errr … neck. The loop is only 35 miles long but will take around two hours depending on the traffic. On a bad day in lousy weather, the southerly exit road through Bealach na Ba would certainly command your full attention. I’ll let you Google it.

Continuing on, as you pass the turnoff to the Isle of Skye, the route joins the A87. This section of the route you are going to enjoy. For the next 40 something miles, the road will be a succession of fast-flowing bends. If you ride that road and are unmoved, I’ll be stunned.

Day three of the Tour of Scotland ends at the Fort William Premier Inn. The parking here isn’t that good. The bottom car park is out of sight and near a footpath. There are numerous B&Bs to choose from and the Alexandra Hotel is adjacent to the roundabout. You are spoilt for choice.

Wherever you decide to stay, Fort William due to its popularity is always that little bit more expensive.

Day four ends in Carlisle, close to the M6 and the A69 giving you an easy route to most places in England or Wales. If the A1 just north of York is on your way home, check out the bonus route through the Pennines at the bottom of this article.

If you have stayed at the Premier Inn, there is the option of the pub, or there is a McDonalds nearby. My advice though would be to fill up with fuel from the Morrison’s petrol station just by the main roundabout and then head to the Green Welly Stop, 60 miles along A82, for breakfast.

On a sunny weekend, the place will typically be packed with bikes.

As you can see, for us, on the second ride through, it rained – a lot.

On your way to the Green Welly, you have the option to take the loop around Loch Leven and through Kinlochmore (B863). On a sunny morning, this is an epic diversion and twisty. If it isn’t for you, just stay on the A82 as the loop rejoins the main route a few miles later.

After leaving the Green Welly Stop, the route is a tale of two halves. The M8 bottleneck between Glasgow and Edinburgh, when compared to the previous three days, can be a bit of a slog.

Once south of Hamilton, the roads open out again and it is an enjoyable ride back south of the border and into Carlisle, ending up at Carlisle Central North Premier Inn.

And that is the route for the What Could Possibly Go Wrong Tour of Scotland. The GPX files are on the touring routes page and are free for you to download and use.

For those of you that will be heading south or east, there is a bonus route through the Pennines, that ends at a petrol station in Boroughbridge, northeast of Harrogate and close to the A1.

The bonus route is best ridden early in the morning. Breakfast can be found at the Chatterbox Cafe in Saint John’s Chapel.

Categories: Touring
Tags: free tour, routes, Scotland
There is 1 comment for this article