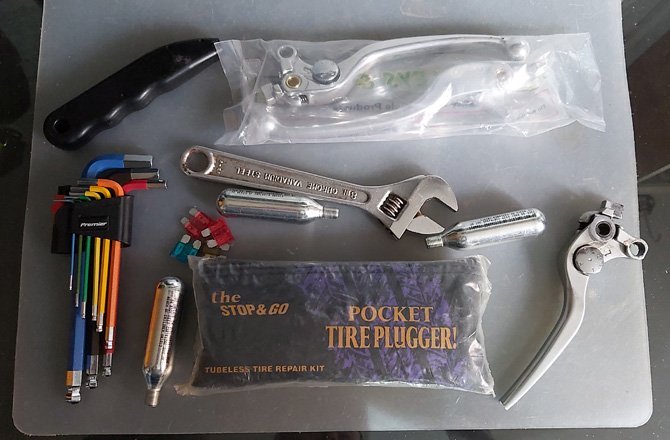 Having planned multiple trips both across Europe and around the UK, none of which I’m currently allowed to take, I turned my attention to the things in my Touring Toolkit to take with me as soon as I can escape.

Having tubeless tyres, a puncture repair kit in the form of a plug fitter and the compulsory CO2 canisters to refill the tyre are a must-have. These I carry regardless of it being a sunday ride or a tour across Europe.

When travelling further than my favourite back lanes, I do the same as you and start adding things to the “Touring Toolkit”. An ample supply of cable ties and of course a roll of duct tape, with which the manufacturer claims I can fix most things, except “stupid” are always useful.

Naturally, tools are required, but not the whole toolbox. I won’t be stripping the engine at the roadside. Instead, I have just enough tools to (hopefully) get me out of trouble and to a dealership.

That crime against humanity, an adjustable spanner is in the kit, along with the spanners and socket to adjust the chain, which also requires a collapsable breaker bar. And because I’m riding a V-Strom, a selection of Allen Keys (hex wrenches) because Suzuki used them everywhere on the bike.

And for the past few years that has been all I thought I needed. Recently I added a knock-off Leatherman multitool to my touring toolkit. It is such a useful device that then I shoved it in my tank bag along with some fuses, and now carry it with me all the time. The objective though is never to perform major surgery at the roadside, I just want to get to the nearest dealership.

However, there is always a lesson to learn. Every day, as the saying goes, is a school day and now at the bottom of my touring toolkit is a replacement clutch and brake lever.

Lose your footing; forget to double-check the side stand is fully extended, or even (heaven forbid) take a gentle, low side and the clutch or brake lever will most likely snap.

Most of the levers fitted as standard have a weak point purposely cast into them. The idea is that being the weakest point; the level will break there and leave you with enough of a stub to limp onwards.

The weak point is a great idea, yet if I’m 50 miles from the nearest town, let alone how far from someone with a clutch lever to sell me, I’d be thankful that a quick rummage in the top box would be all that was needed to fix the problem. That and 10 minutes with the evil that is an adjustable spanner, naturally.

Saving the best until last, it has to be the next day. Rather than roaming the nearby towns in search of a lever while the rest of the group do what you came here to do – ride the damn bike – you are out there with them.

Now, because I’m an idiot, I forgot to note whose blog I was reading when I picked up on this gem of an idea. Consequently, I can’t pass on my thanks for such a wonderfully simple suggestion. Whoever you were – Thank you.

And let’s be honest. I should have worked this out for myself years ago. But no one needs to know that.