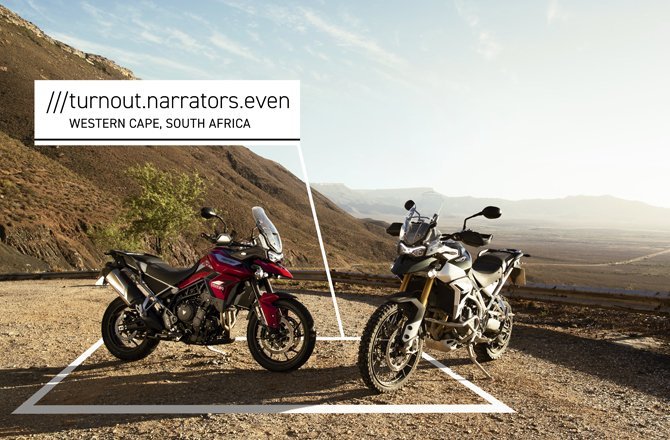 How do you explain where you are, in an unfamiliar country? Simple answer, What3Words, and best of all – it is FREE.

Having made all of the upfront decisions about where your motorcycle tour will take you; the routes you want to ride and your plan for the Peage system in France, it is still worth considering the darker side of life.

Breakdown Insurance is something nobody wants to pay for but is worth every penny when you need it. But how do you tell the breakdown company where you are?

If you get separated from the other people in the group, what is the plan for meeting up again? You may have a fantastic view from where you are, but in some parts of the Pyrenees, that is akin to saying you can see the sky.

Theoretically, we could use Latitude and Longitude to describe where we are. After all, underneath any of the SatNav solutions is the Global Positioning System, and GPS uses latitude and longitude. The problem is that describing somewhere as 51.520847 North, -0.19552100 West, is frustrating and prone to errors.

Making precise locations easy to describe was the problem that the founders of What3Words solved. In doing so, they divided the world into 3-meter square bite-sized chunks and gave each of them a unique name.

Cheese.Puffs.Rule, for example, is a 3-meter square of planet earth near Palmas in Brazil. The podium at Donington Park Race Circuit is at Laces.Angle.Funny. Although to use the correct formatting W3W write it as ///Laces.Angle.Funny

The primary purpose of the What3Words website is to navigate you to precise locations easily. It can also provide endless fun looking up places that have, by chance, been allocated amusing names.

For the politically minded there is ///Lost.That.Seat just off the coast of Grimsby in the UK. Or perhaps you prefer ///Cold.Rice.Pudding a 3-meter square, miles from anywhere in the Northern Territory of Australia.

Having entered the three words that describe my destination, transferring the destination to my navigation app, is as easy as pushing a button.

What3Words picks the compatible apps on your phone and asks which one to use. The required destination is then pushed to your chosen app, and the SatNav software takes over. Simples.

I did ask Google Maps to plan a route to ///Cold. Rice.Pudding in Australia, but from where I am as I write this, the result was “No Route Found.” 😊

Triumph Motorcycles have gone one step further than this and integrated What3Words into the My Triumph App, which provides the turn by turn navigation instructions on the TFT displays of recent Triumph models.

Whereas owning a 2020 Triumph is desirable, it isn’t a requirement for sharing your What3Words location.

The exact number of sharing options available will differ depending on what you have installed on your phone. Among my choices are email, text message, Twitter, Telegram, and even an option to post my location on Reddit.

When you share, what is sent is a link that will open in the What3Words app if installed on your phone or connect you to the What3Words website if not. The recipient then selects Navigate, and they will be guided directly to your 3-meter square.

The benefits for the breakdown and emergency services are immense. Would you rather describe your location as “On the B562 just outside a small village by a double apex left-hander” or use What3Words?

Waiting for a breakdown van is boring, but time isn’t typically a factor. For the more … let’s call them “Time Sensitive” … services that are trying to find you, being able to share an exact location with them, is a significant advantage.

But I Don’t Speak English

Whereas ///Cold.Rice.Pudding may be vaguely comical as a location name in English, it doesn’t translate word for word into German or any of the other 43 languages that What3Words speaks.

Take the car park at the southern tip of the B500 in Germany as an example.

///Honeysuckle.Central.Planner directly translated into German is Geißblatt Zentralplaner – according to Google Translate. Not only is that just two words, but they are also not the words that the German version of What3Words uses for the same location. For that, you will need ///Regen.Aufträge.Ansprüche 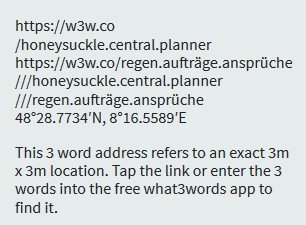 To help monolinguistic Englishmen such as myself, What3Words has a secondary language option. Turn this on and the three words needed for German or any of the other available languages will be displayed alongside the English version.

You can also add in traditional latitude and longitude if you wish, although the message does start to look messy, the more information you include.

When I first started using What3Words, it seemed cumbersome. Perhaps it was my brain rejecting the combination of words that typically are not found in the English language. The benefits, though far outweigh any issues my Luddite brain wants to throw in the way.

And I did say you get all of this for free … didn’t I?