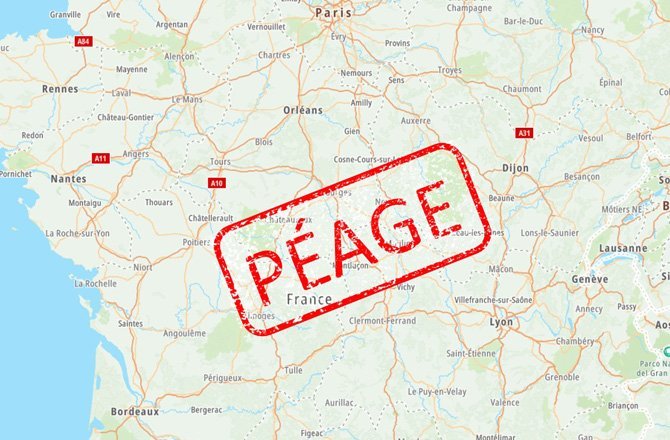 As the chance to go touring on my motorcycle gets closer to being a reality, I decided to try and truly understand the French Motorway Tolls and how the Peage system works.

The first question has to be why bother with the motorway toll routes when there are more exciting roads to travel. The simple answer is the size of France. Sometimes, if you want to get to a specific part of Europe, then the only way to do it efficiently is to nut up and do the boring motorway miles.

Planning a route across Europe for me is part of the fun – unlike paying motorway tolls which I find irritating. The tolls can be easily avoided if you wish and our thoughts on choosing between paper maps or online route planners can be found here.

The French motorways are generally excellent. Fast, smooth roads that let you burn through the miles and get where you are going. As a motorcycle, you are a class 5 vehicle, and you pay a significantly reduced fee compared to larger vehicles.

For example, travelling the length of France, Calais to Spain cost 58 Euros for a motorcycle and 96 Euros for a car. (Or it did when I wrote this)

By far the simplest way to pay the Frech Motorway Tolls on a motorcycle is to use the toll booths, especially the ones with a human operator. There can be little doubt that you are riding a motorcycle if you are paying a person, rather than relying on technology.

The automatic booths (“Automatique”) rely on sensors in the lane detecting you are a motorcycle. If the Gallic driver behind you is too close, or you ride in as a group, the sensors can be fooled into thinking you are a car. At this point, assuming you know what the fee should be, you either start a debate in your best school French or suck it up and move on.

When approaching the Peage, check the signs over each lane, not only to see which ones are open, but if there is a specific motorcycle lane. Typically you will find a person manning this lane, where most of the other lanes will be automatic.

The other option for paying the French and some other European motorway tolls is the Telepeage tag. This is a little device that connects to an online account you create, through which it takes care of payments. You don’t need to stop – well that is the theory – and it should speed you past the toll queues when the motorway is busy.

There is a UK based company, Emovis Tag UK Ltd Based in Harrogate in Yorkshire, that supplies the tags. They are part of a wider company that does this for most of Europe.

But here is the rub … It will cost around £25 to get set up with a tag and you still pay the same tolls. Tag users don’t get a discount; it just lets you ride through without having to pay there and then.

If you use the standard “Automatique” or tag lanes, you will be charged the standard car rate without the ability to object.

You are also going to need is a screen to make the unrestricted height “Automatique” lane work. The tags are designed to be stuck to a car windscreen. The sticky side is the side that talks to the Peage (motorway toll) system.  If you stick the tag facedown, chances are it won’t work.

Even Libre-t, the company that makes the tags suggest that motorcyclists don’t use the automated lanes. Rather you should hand your tag to the operator in a manned lane. That’s the same person you could have handed cash or a credit card to.

Within 10kms either side of a TelePeage is often where speed camera operate. The idea is that they don’t have to chase you as you have to stop for the Peage. Any kind of speed camera warning device, even the one built into your GPS is illegal in France. It is worth knowing where the Peages are if you are likely to be “motivated” while riding French Motorways.

The other place you find speed traps is on the approach to motorway services. If you get caught speeding, the first you may know is when you are ushered into the services by the chase car and taken to the cash machine.

Whereas the speed cameras are still just as common, it is more likely these days that the bill will land on your doormat a few weeks later. Trust me … I have direct first-hand experience of this. Ooops.