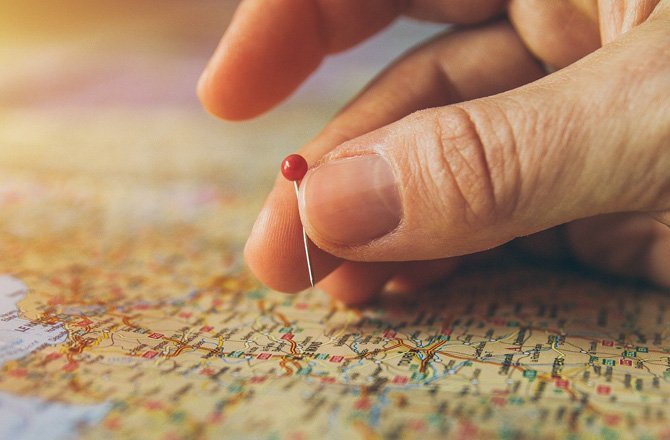 Over the past weeks, I’ve come up with so many motorcycle trips I want to take I’m going to need six months touring to put a dent in them. If sitting at home has had you thinking about travelling far and wide on a motorcycle, and this is something new for you, here are a few thoughts that might help you along.

The more seasoned tourists amongst you might choose to skip ahead to the later articles as you will be familiar with what follows.

One thing is certain though … There is nothing quite as enjoyable as touring on a motorcycle.

Mostly that is an easy question to answer – Anywhere that has the sort of roads you enjoy riding.

Spain is a common choice for European riders. A motorcycle-friendly country. Excellent road surfaces, and sunshine. What is there not to like?

There are tight twisting mountain passes, fast-flowing roads through the countryside and wide multilane roads if chewing through the miles, is your thing.

Then there is the famous B500 in Germany running from Iffezheim on the border with France (near Baden-Baden) and through the “Wilder See Hornisgrinde” to the B500’s end at Kniebis. Most of the roads through that area are excellent.

A little closer to the UK is the Parc Naturel Régional des Ardennes (East from Calais and south of Brussels) that offers great scenery through the forests if the reminders to look out for wild boar are a little worrying.

Having chosen your general location, you now need to work out how to get there. It sounds simple but I’ve seen people argue over this for hours.

The two main options are the ferry, across the channel or the Bay of Biscay, or put in the miles on the motorways.

The Stena Line ferry from Harwich to the Hook of Holland is my favourite because it gets me an extra day on the roads I like. I can make the evening ferry after a day at work, and sleep my way across the channel to Holland in a very comfortable cabin.

Brittany Ferries offer the ferry route to Spain and you will often find a large contingent of motorcyclists onboard. I’m not a fan of the 30-hour crossing and see it as a necessary evil to get where I’m going.

The alternative to any of the ferry crossings is the highly efficient Channel Tunnel and either a day on the motorways or perhaps two days on the backroads, getting to your chosen area.

And if none of that is for you, there is a wealth of stunning scenery and some great roads in the UK. Joining Scotland and Wales together via the National Parks is one of the many trips I have planned.

In the group of us that ride together, I’m the planner. I enjoy investigating where I’m going and so putting “lines of the map” is an easy thing to do.

Inevitably someone is going ask, “Where are we going today?” and the trick to answering that question, so everyone stays happy – more on happiness in a moment – is to have a few pre-planned routes ready.

Another question that comes up when planning a tour, how far each day is far enough on a motorcycle? The answer is to not listen to anyone else and do what suits you.

Some people see it as a badge of honour to – claim they – ride 400 plus miles a day and, yes, that is perfectly possible. Yet 400 miles on twisting roads is going to take at least eight hours of riding, plus stops.

Completing 400 miles on a motorway to get somewhere on the first day of the tour, sure why not. Then dropping back to a more relaxing 200 miles a day and enjoying the ride, is much more my cup of tea.

Plan around the sort of riding you enjoy. Big mileage numbers require hanging on to the handlebars while chewing through tankfuls of petrol on motorways or arrow-straight roads, which is perfect if you are then going to spend a few days at each location.

Having worked out where you want to go and how to get there, pick a town in the middle of the region you are visiting and start searching for hotels.

The Hotel Infantardo on the excellent N621 a few kilometres north of Potes in the Picos area of Spain is one I’ve used a couple of times.

Although the N621 is the main road north/south, there is an abundance of excellent roads running off in every other direction. Coming up with a handful of 200-mile loops isn’t tricky due to the location.

Alternatively, if you pick somewhere on the coast, you automatically remove half the directions you could travel in. That isn’t to say coastal towns make bad fixed based touring locations it just makes planning a little more challenging.

Navia on the northern coast of Spain is one of my favourites. It is also far enough west that the prices tend to be a little lower than the Picos, although the motorway ride from the ferry isn’t the most invigorating .

Personal choice for a hotel is Casona Naviega which has a big car park at the rear and is one of the most relaxed places I’ve stayed. One very rainy Sunday we opted to stay in and watch the MotoGP races rather than get soaked. The owner decided we need a bottle of wine to accompany our viewing and just left one with us. Superb.

The roads are equally as good. There is a great loop to Lugo which is south-west of Navia, using the N-640 and the N-634 that is 170 miles long and entertains most people.

When you pick your base, remember to think about food. Local eating arrangements can be different. Staying at a hotel in rural Spain on one trip, the restaurant at the hotel opened at 9 pm but only three days week. The first night we ended up eating what we could buy in the local petrol station.

As the name suggests, this type of motorcycle tour is about bouncing from one destination to the next. You are spoiled for choice when it comes to roads, as by their very definition you are never in the same place twice. Petrol planning on some for the more out of the way routes can be “entertaining”, and an extra five-litre can does give you that feeling of added security.

The big question with cross country touring is whether you book the hotels in advance. For those who do prefer to book in advance, there is the pressure of getting there. Odd things can happen, such as a day of solid rain in the middle of summer or suddenly passing a snowplough as you ride into the hills after a day at the beach.

After the first snowplough came two more. A few miles further, we discovered why we were passing snowploughs as we rode into the snow, and this was in Spain in late April.

All of the pressure to keep going to the hotel we had booked was self-imposed. We should have just turned around and ridden back down the hill to a different overnight stop. Yet despite me messing up a gear change and low siding in the snow, we arrived at the hotel, relatively unscathed.

The alternative view is that there is nothing worse than riding around looking for somewhere to stay. There is a temptation to take the first thing you find, while others will want to keep looking for a better deal.

Which one is better?

For that, there is no answer. It is a personal preference and comes down to the people that you are riding with. I’ve been on organised tours where everything is preplanned. Tours where we had a selection of routes to choose from while staying in the same hotel for a week and a trip that was “hit it and hope”. They all have their plus and minus points.

This is the big point that I alluded to earlier – happiness. Picking the people is more important than the type of touring you are doing. It is one thing to enjoy a Sunday ride together and another to take on a week-long trip.

Having everyone on the same page and with the same outlook is an essential part of a successful tour. There is nothing – absolutely nothing – worse than someone sniping from the cheap seats. As the saying goes … “there is nowt as queer as folk”.

Having worked out which style suits you best, and the people you want to travel with (if any) next comes the route planning and the big decision … whether you use a GPS or not. That said, this article is already long enough, so I’ll stop here. Part two can be found here.