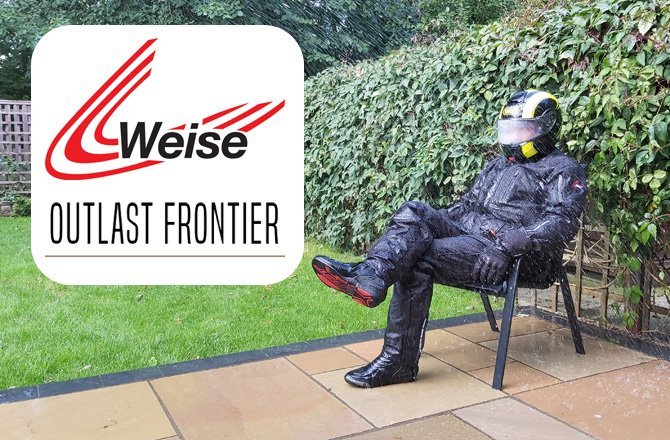 It is early September and I’m zipping the thermal liner into my Weise Outlast Frontier Jacket. What is going on with the weather?

Tomorrow’s 200-mile ride, looping through Thetford Forest has an early start and the temperate will just make double figures. By the time we get a “progressive” pace on, the wind chill will have dropped the temperate to 4 degrees.

Read that last sentence again … I’m talking about “wind chill” and it is early September. OK, it will warm up through the day, and might even get to 14 degrees by mid-afternoon. And that is the problem, do you freeze in the morning, or cook in the afternoon?

It is the variable nature of European weather that demands so much from motorcycle clothing. A few weeks back I was reading tweets from some of the people I follow on Twitter. They were complaining about 30-degree temperatures and tarmac blistering sunshine as they toured Scotland.

The next day the same people were complaining about the torrential rain they had been riding in.

When choosing your motorcycle jacket, you need to allow for all kinds of weather – even in summer. 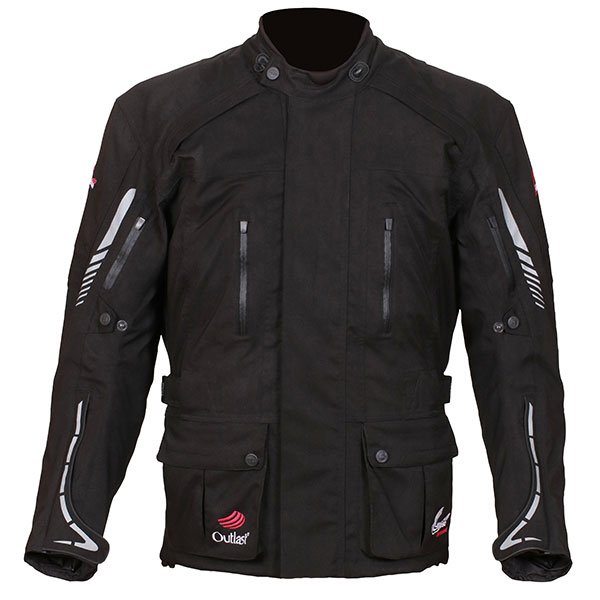 With all that in mind, Weise Motorcycle Clothing set us a challenge.

Their belief is that the Weise Outlast Frontier Jacket and Trousers would meet all of our needs, regardless of the time of year.

To back up their claim Weise sent us a Weise Outlast Frontier Jacket and Trousers and told us to test them.

There was no requirement for us to say nice things in return. Weise simply believes that they have a superior product that would stand up to any selection criteria, no matter how exacting.

We are free to write whatever we choose and what follows, is the start of our unfiltered opinion of the Weise Outlast Frontier Jacket and Trousers.

I dislike getting wet with a passion. I’ve no problem riding in the rain, just as long as the water isn’t getting in anywhere. It’s when that first ice-cold trickle of water makes its way in and immediately you start calculating how much longer the journey will take. That is the worst bit.

After that, it is just a case of being miserable, until you get where you are going.

This is why I’m sitting in the garden, ironically a few days after a large storm passed through, getting hosed down. Granted this isn’t the same as travelling 70mph in the rain, but if there is an entry point for ice-cold rainwater, better to find it here than a hundred miles from home.

After 10 minutes of getting watered – by people who seemed to be enjoying their task a little too much – the Weise Outlast jacket and trousers are wet, but, most importantly, I’m mainly dry.

The water has drained down my arms in to my gloves, but this is an because I’m sitting in a garden chair getting sprayed rather than riding.

There is still the upcoming trip to Scotland to get through, but this is a good start.

The morning of the 200-mile ride arrived and I was cooking. I had the quilted liners in both the jacket and the trousers and while I was checking the V-Strom over before departing, I was getting uncomfortably warm in the Weise Outlast Frontier gear.

This was when I made a stupid mistake and removed the quilted liners. What I should have done is waited and opened a couple of the numerous vents once riding. Easier to add in cool air than add warmth.

Undaunted by my mistake – which I didn’t appreciate until I was on my way – I still decided to test some of the numerous vents the Weise Outlast Frontier jacket has, while riding to the meeting point

As I could reach the pairs of vents in the upper arms, shoulders and chest, I rather reluctantly opened them in turn. Each time, I was greeted by a blast of cold air, which I endured for a few minutes before closing the vent.

The vents at cuffs and the vents in the back panel I couldn’t reach while riding and … well … the truth is I wimped out. Yes I could have stopped and opened them, but having established I could get copious amounts of fresh air into the Outlast Frontier jacket, I closed everything up in favour of getting warm.

I’ll add those vents to the “to do list”.

We never think about them. They are, after all just zips. Not exactly a topic of conversation for the next bike meet. Tyres, exhausts, racing – yes all popular subjects – but zips. Nah.

Thankfully, someone at Weise had been thinking about zips and rather than taking the low-cost route of a tab and a press stud when it comes to securing the quilted lining, there are zips at the cuffs of the jacket and at the bottom of the trouser legs. It is a nice touch – seriously, it is a great touch of quality.

Another example of going that extra mile is the three-quarter length zip around the waist to join the trousers to the jacket. This is in addition to the normal short length zip just across your lower back.

They are simple things but those little details are really going to be welcomed on a long ride. Same goes for the two zips and a storm panel in the front of the jacket to ensure a weatherproof seal.

With so many zips, comes the opportunity to try and join the wrong ones together. I know this because I’m stupid enough to have tried. Thankfully, that person at Weise who was thinking about zips made the zips for the most likely mistakes, different sizes. Thank you.

Where do I even start? There are so many neat little touches, and it is those that set the jacket apart from others that the same price point.

Have I mentioned the adjustable collar, that comes with a detachable quilted neck liner? How about the phone pockets that is the size of the latest generation of Apple and Samsung phones.

Or perhaps I should mention the removable CE approved shoulder, elbow and back armour and the subtle reflective highlights.

How about the expanding panels? We have all seen the photo of the riders backside and the expanding panel in their leathers. Well, Weise fitted one in the Outlast Trousers and not just a token gesture but one of sufficient size to make a notable difference.

Then there is the fact that the same Weise Outlast Frontier clothing is available in both male and female cuts. The list goes on – two way zips on the cuffs for example – it is these small but significant touches that make the difference between a good jacket and something excellent.

Round one of the challenges goes to Weise. The Outlast Frontier range has had an answer for every question we could come up with (so far!)

Nothing is perfect. A few of the fasteners are fiddly and I miss the inside pocket on the jacket that isn’t buried under all of the layers. But none of these detracts from a well thought out and versatile jacket.

Next, it is our turn to set a challenge. We are returning to Scotland at the very end of September, and, if we are lucky the bad weather we encounter will be limited to some rain.

Weise says the Outlast Frontier range is for all seasons. We should get four in one day in Scotland if its reputation holds. Let’s see what happens …