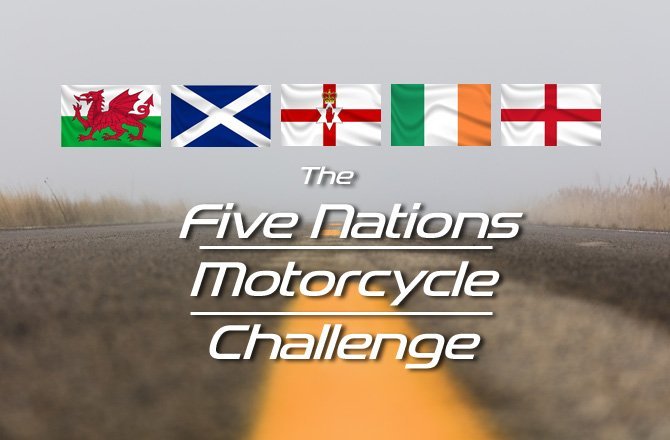 The Five Nations Motorcycle Challenge involves riding through all the countries in the British Isles and Ireland in five days. Why five days? It seemed the right blend of riding with time to enjoy where you are.

If this to be a decent motorcycle challenge we are going to need some “rules”. Nothing so arduous that it becomes a chore, but something to add a little extra spice.

There is of course absolutely no reason to follow any of the Five Nations Motorcycle Challenge rules. You could take the motorway everywhere and the most direct route between ports … but where is the fun in that.

After a few hours plotting and scheming, our approach to completing the Five Nations Motorcycle Challenge is below.

If there is anything you would do differently, great roads we are about ride passed perhaps, or places we should stop – cafe suggestions are always welcome – let us know.

Sticking a pin in the map that was somewhere roughly in the middle of England, we decided to start our Five Nations Motorcycle Challenge at Morrison’s Supermarket Petrol station in Minskip near Harrogate.

Every trip has to start somewhere, and here is as good as any. Plus there is tea and cake while we wait for everyone to arrive.

Heading north-west towards Scottish border we have opted to thread the gap between the Yorkshire Dales National Park and the A1M, and then use the A689 to cross the Scottish border north of Carlisle at Gretna.

To make the 100 miles in each country rule, we had to put a few wriggles into the route through Dumfries. Rather than take the direct A75 route we opted to take the A712 and to ride The Queen’s Way through the Cairnsmore Nature Reserve.

Add to our scenic meanderings, a night stop in Stranraer and the short ride to the morning Stena Line Ferry from Cairnryan, and we meet the requirement for 100 Scottish miles.

We could have ridden so many more miles in Scotland. Twice in 2020 we covered over 750 breathtaking miles through Scotland and with so many great roads to ride it would be easy to spend the remaining four days exploring them. But there is a challenge to complete, so we need to keep pushing on.

The 7:30 am Stena Line ferry from Cairnryan, put us in Belfast around 10 am. Using up 7 of the allowed motorway miles will get us away from Belfast docks and heading towards Toberdowney and Drumnahoe to pick up the A2 coast road.

Joining the North West 200 course at Church Corner, where the A2 coast road meets the A29 at Portrush, we get to ride the famous Ballyreagh Road and follow the course until Ballysally, where we take the ring road west.

All of which will be done at a very sedate pace. Getting nicked for speeding on the NW200 course would be an embarrassing cliché.

Crossing into Ireland at Londonderry, we’ll keep going south-west, until we arrive in Donegal for the second night stop and a pint of Guinness – One cliché we won’t object to.

To meet the requirement of touching the west coast of Ireland, we’ll be claiming Magheracar, 20 miles south of Donegal. There are places further west in Ireland, but if we sailed west from Magheracar, there would be nothing but ocean, so that qualifies as the west coast.

From there, the easy path would be direct to Dublin via the A509/N3 route, but that means missing out on some cracking Irish roads, so we are planning to take a long loop to arrive in Dublin after 220 miles.

The N61 to Roscommon and on to Athlone. We’ll avoid the M6 at Athlone, which would be boring and also break the rules, by taking the N62 and N52 to Tullamore. Then loop underneath Kildare and pick up the N7 for the last few miles through the outskirts of Dublin.

There has to be any number of different ways of getting between Donegal and Dublin, but looking at the roads on Google Earth, we should enjoy ourselves.

The day starts with four hours on the Stena Line Ferry from Dublin to Holyhead, after which we are spoilt for choice when it comes to roads.

The rules of the Five Nations Motorcycle Challenge require us to reach the south coast of Wales, yet there are so many different routes to enjoy. Do we hug the coastline road to Pembroke? Or perhaps ride east a few miles and then take the maze of wonderful backroads than run north-south, cross the Brecon Beacons and end up in Cardiff or Swansea?

After drinking two mugs of tea while studying the map, we finally opted to for the A4085 Waufawr Road and the A470 across Snowdonia National Park.

The A470 is a Marmite road. Some parts have been modernised, with dual carriageways that have had the bends ironed out and other parts that will inspire you.

After Snowdonia, we are taking the A485 to Carmarthen and then on to Llanelli to qualify as having ridden to the south coast of Wales.

The last day of the Five Nations Motorcycle Challenge could be seen as simply a day to ride home, but where is the fun in that?

We picked Llanelli as a night stop so that we can ride the A4069 an A4067 through the Brecon Beacons National Park, where you will find some stunning scenery to ride through, as long as the weather plays along.

If you looked at the Triumph Tiger 850 launch photos, several of the “Tiger 850 in beautiful scenery” shots where taken on those two roads.

After soaking in the views and hoping we don’t get rained on too much, we have chosen a mixture of A and B roads to take us to Middletown, a few miles west of Shrewsbury, and to cross the border into England.

From there it will be the usual – for us anyway – cross country route that runs north of Birmingham and south of Stoke, depositing us near Nottingham.

And there you have it, The Five Nations Motorcycle Challenge. There are no prizes, although the Editor did say that if you email him your postal address he will send you some free stickers.

Twenty-Twenty wasn’t the best year for motorcycle touring. We have a long list of trips not taken. Getting an early start on Twenty-Twenty-One sounds like the perfect new year’s resolution.