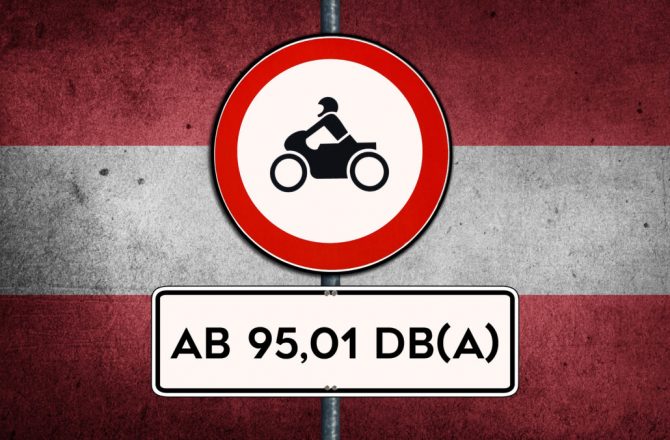 Austria Bans Motorcycles. Motorcycles Not Welcome in Tyrol. No Loud Bikes in Austria. Tyrol Bans Loud Bikes. Those were some the sensationalist headlines (translated) when the new noise limits were announced for selected roads in the Ruette District of Austria.

However, the facts behind Austria and motorcycle noise tell a very different story. Contrary to the sensationalist headlines, Tyrol actual welcomes motorcyclists and hopes we will visit them soon.

On the 10th June 2020, a new set of rules came in to effect on some of the popular motorcycling roads in the Ruette district of Tyrol (Tirol), west of Innsbruck, in Austria.

From June 10th 2020, motorcycles with a registered noise level of more than 95dB (A) may no longer drive on the specified roads. The 95dB limit isn’t how loud your motorcycle actually is, it refers to the figure the factory used when they homologated your motorcycle.

The registered dB figure is shown on one of the VIN plates on your motorcycle. In the UK that figure is also on the V5 registration document. If your bike has had the CAT removed and a full race exhaust system added, this doesn’t appear to matter for this rule, although I don’t think I’d wish to test that assumption.

Out of the showroom, the Suzuki V-Strom passes at 89dB. Kawasaki ZX10 and most Honda Fireblades are over the limit at around 97dB, and should you be riding a Ducati Multistrada 1260, then best visit other places as your figure is 102dB.

Suzuki GSXR 1000s are over the limit. As is a long list of Triumphs including Street Triples, Bonnevilles, Tigers and the 2020 Rockets IIIs, all of which come in at around 97dB

When, Where and How Much?

The noise restrictions run from June 10th to 31st October 2020 and affect only motorcycles. Cars, trucks and any other vehicle may continue to use these routes regardless of the noise they create. As for what happens in 2021 and beyond, we will have to wait and find out.

If caught on one of these routes, and your motorcycle was registered by the factory as louder than 95db, the fine is 220 euros. And it doesn’t matter if you are a local as there are no exceptions for residents.

While researching this article, as you might imagine, most of the information is in (Austrian) German and Google translate isn’t the same as speaking the language like a native.

One quote on the subject I came across, is attributed to “Noise expert for the region” Christoph Lechner, a copy of which is below. The “large majority” he refers to is a maximum of 7% of the respondents to the study if I’m interpreting the report correctly.

“The expert basis for these regulations is the representative noise study, which clearly showed that motorbike traffic on summer weekends and especially high-speed driving during acceleration and braking are most disruptive for the respondents. Driving bans for ‘noisy’ motorcycles and the blocking of certain routes are approved by a large majority, but general weekend driving bans are mostly rejected “

One of the most in-depth articles on the changes in Austria and Motorcycle Noise, including the initial study, subsequent reports and the [oddball] conclusions drawn by the authorities, is written (in English) by Dolf Willigers.

You can find the article on the Federation of European Motorcyclists’ Associations’ website. If you want the whole story then Willigers’ article is the one to read.

What was really needed

Regardless of the language though, the sentiment across all of the articles that I’ve read and condensed here, remains the same.

Only a small percentage of people in the Ruette District asked for a ban or other measures that would stop motorcycling. Tourism is significant part of the Tyrolean economy and motorcyclists are most welcome.

What the people of Ruette actually wanted was a reduction in the noise level generated by a minority of the visiting and I assume local bikers, that spend their time “hooning” through one of the most beautiful parts of Europe.

The real solution is much easier than all the new rules … Pick a higher gear; reduce the howl from the race can, and everyone gets on with their day. Simples.