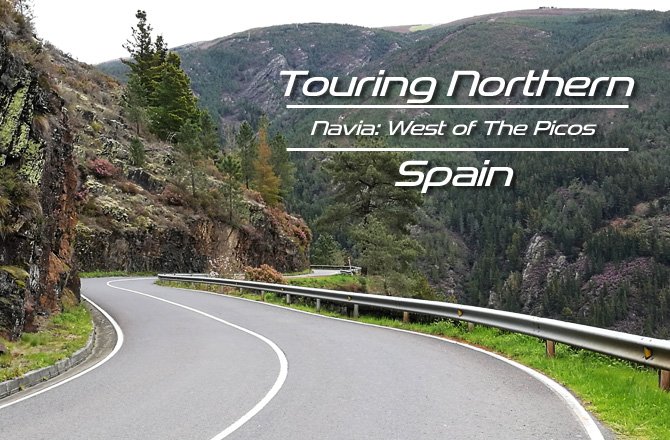 When it comes to picking a destination, touring northern Spain isn’t normally top of a motorcyclist’s list. Arriving motorcycle-friendly Spain and most riders they will say they are heading for the Picos de Europa or riding the N260.

So, kindly allow me to make a case for basing yourself in Narvia and riding the roads on the north-west corner of Spain – often called “green Spain” I’m told – and introduce you to the roads west of the Picos, which sounds more like a 1950s cowboy movie, than a motorcycle touring destination.

Motorways are boring, but there are times when they are a necessary evil. Arrive at either the Santander or Bilboa Ferry Terminals and there is 170-200 mile journey to get to Navia. It is at times like this that A-8 motorway which runs east-west across Spain’s northern coast is a welcome sight.

Should you be keen to dive straight into the gorgeous Spanish roads there several alternative routes for you to choose from. However, I’d suggest using the motorway to get well west of Santander before heading for the twisties.

On one Spanish trip, our self imposed goal of not using motorways resulted in us riding through large towns and shopping districts. Not the most sensible way to start touring northern Spain.

Using the motorway until you get to the N634 junction around Cabrojo, and then turning off, avoids all that frustration and get you on to the good roads sooner.

Turning off the motorway though, will come at a cost. I’ve tried several different routes, and I always end up needing to take a very circuitous route to get to Navia. The smaller roads are the more direct route but go through numerous villages and small towns. The faster N roads will take you miles off track but provide a much more engaging ride.

It has always seemed to boil down to taking the motorway direct to Navia or making the first night stop somewhere such as Riano – 100 miles from Santander – and riding the highly enjoyable if circuitous, N road route, the next day.

Both routes are available on the “Touring Northern Spain by Motorcycle” routes page, along with all the other routes mentioned here.

Trip Advisor and Booking.com will give you alternatives, but if possible I’ve always stayed at the Hotel Casona Naviega. There is a large private car park at the rear of the hotel. Good breakfasts, good coffee and most importantly, they understand motorcyclists.

One Sunday when all it was going to do was hammer down with rain all day, we opted skip riding that day in favour of watching MotoGP. Halfway through the Moto2 race, the hotel owner came along, shrugged at the weather, handed us a bottle of wine and then wandered off. No charge, just a good understanding of what it is to be a motorcyclist.

I have no agreement with Hotel Casona – I paid my bill the same as you do.

So why tour northern Spain by motorcycle, when you ride passed the Picos to get to Navia, and the N260 is in the opposite direction? Top of my list would be variety. There is something for everyone here.

Need a day on the beach, assuming you go in summer, and you have several to choose from. Coastal walks more your thing – Yes got those too. If food is what you desire, accepting the Spanish lifestyle of not eating until late into the evening, then there are more than a few decent looking restaurants in Navia to choose from.

Most of Spain and this region, in particular, has a vast selection of wonderful cafes to choose from. You won’t be going hungry. Coffee, tapas and tortillas – excellent.

The second reason on my list would be cost – especially in summer. My first trip to Navia was simply because I’m a cheapskate and I didn’t want to pay Picos prices. When searching for hotels I noticed that once I went west of Gijon, the prices started to fall.

But we are mainly here for the roads, and there is variety there too.

The Loop South is a 200-mile route and a good place to start. It mixes wide sweepers with tighter, but good quality, roads through valleys and along hilltops. There are a few hairpins to negotiate, but it is nothing like the Alps.

Loop East 140 Miles might look like a good place to start but some sections are made up of constant corners, and it can be tiring constantly working the gearbox and the brakes, especially two-up. Save this one for a day when you wish to be “on it” all day.

The Loop West at 120 Miles is the shortest and uses part of the LU-P5501. I have never clearly understood Spanish road numbers to know exactly what to expect from the naming convention alone.

Having ridden this route, there are parts of the LU-P5501 which you would choose to ride on an adventure bike. That said, the Fireblade had no problems, it just wasn’t the bike you would have chosen to be on for that section.

On other parts of Loop West the Fireblade just disappear off into the distance.

If I had to pick a favourite route, I think it would be the Lugo Loop. The AS-12 is a great riders road and the N640 on the way back is fast and flowing. Lugo is also a decent size town, so make sure you stop for lunch and enjoy the day.

One thing to look out for on all the “back roads” is surface break up on the entry and exit of the corners. It is caused by heavy vehicles breaking/accelerating with their wheels turned. It normally isn’t anything to be concerned about, but occasionally there is gravel or a rough road surface at exactly the point you are applying the power or starting the brake. Doubly so if you are “making progress”.

Navia: Touring Northern Spain. Lots of variety, lower cost, cracking roads. Has to be worth a visit.

All the routes are on the Motorcycle Touring Routes page. Enjoy.