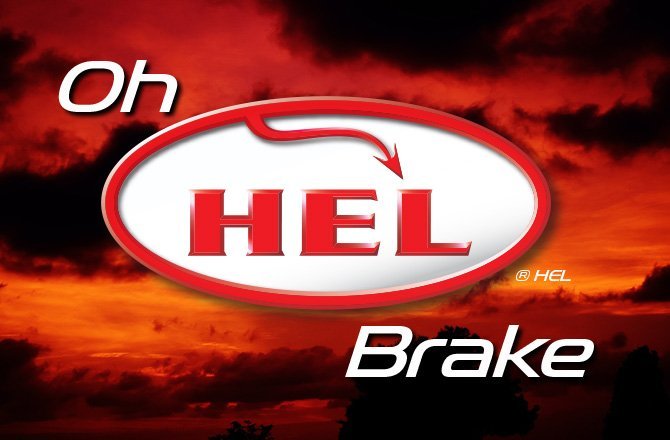 I’m sure the “Oh Hel” pun about Hel Brake Lines has been done a hundred times before.

And having made the compulsory pun, what is the problem that leads me to swap my stock rear brake line for a Hel brake line?

Not unsurprisingly, it is because my rear brake is missing in action. It works, but most of the time it is about as useful as a chocolate teapot. The pedal travel feels as if it varies. The first push feels long, but static tests suggest that I’m imagining it.

One thing is certain though, the rear brake has little or no bite.

I’ve changed the pads for EBC double-H sintered pads. I’ve cleaned the pad pins and the calliper, to ensure everything is moving correctly, and I’ve replaced the fluid.

Each change seems to improve things, but overall I’m still disappointed leaving me with the conclusion that one, or a mixture, of things, is the source of my problem.

It is an easy task, but also easy to cock-up. I always feel as if I need an extra pair of hands. 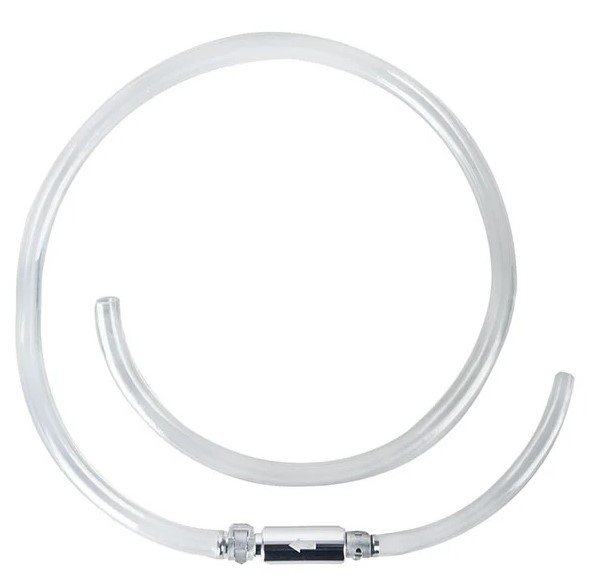 To reduce the need for extra-long arms, I bought an Oxford Solo Brake Bleed Kit – a magnificently simple one-way value.

When the fluid reaches the Oxford Solo one-way value, you can just pump. The valve removes the need to open and close the bleed nipple with each pump.

As a task, that is at a level that even I shouldn’t be able to cock-up, but nothing is off the table as a solution.

I’m even worse at changing the fluid

With Suzuki V-Stroms, the brake fluid in the rear reservoir has a reputation for changing colour. It is often suggested that this colour change is due to the proximity to the exhaust.

Typically, when the colour of the brake fluid darkens, it is a sign of moisture in the fluid. Brake fluid is hygroscopic, which means brake fluid can absorb water from its surroundings.

When moisture is absorbed, the water molecules are taken into the molecules of the hygroscopic substance – brake fluid in our case – often resulting in physical changes, such as increased volume, along with changes in colour, boiling point, temperature, and viscosity.

All of which is the scientific way of saying, if you have water in the brake fluid, and it isn’t going to perform as expected.

So, perhaps the soggy brake lever has been caused by me not pumping enough fresh fluid through the system to remove the old contaminated fluid, while I was bleeding the brakes.

The rear disk is warped

The third of my possibilities is that the rear disk is warped although this seems unlikely.

As the disk spins, it will push the pads just clear of the disks. In normal circumstances, this clearance is fractions of a millimetre.

If the disk is warped, it would push the pads further away from the disk, resulting in a brake lever that needs two or more pumps to move the pads back into full contact with the disk.

When a disk is warped you can fell it. Apply the brake hard and you can feel a pulsing back through the lever. I’ve got none of that, plus as disks are more expensive than Hel Brake Lines, I shall listen to the sage advice that tells us, “Replace the cheapest part first”.

There is a line in the Suzuki service schedule for the V-Strom that reads …”Brake Hose – Replace every 4 years”, and my V-Strom is 4 and a bit years old.

If I replace the hose, I have to change the fluid and bleed the rear brake, consequently, I may as well fit the Hel Brake Line as I’m going to be doing half the work anyway.

There is a fifth possibility. It has been suggested – mainly by micky-taking Africa Twin owners – that since the ECU Flash I’ve unleashed such an excess of power (all 3 – yes 3 – BHP more) that I’ve suddenly discovered I need brakes on the Suzuki.

This from people who bought DCTs – I ask you – what is the world coming to?

Who the HEL are they?

HEL Performance acquired the company Hose-Equip in 2000 as a way of entering what HEL refer to as the “performance fluid-transfer marketplace“.

The name of the company changed to Hose Equip Limited, was shortened to HEL, and the HEL Performance brand was born.

If you are still wondering who HEL Performance are, take a look at most of the bikes on the British Superbike (BSB) grid. HEL’s reputation for quality and innovation tells you everything you need to know.

Of all the things to consider when changing to Hel Brake Lines, the colour of the brake line wasn’t on my list. Yet, presented with a choice of 13 colours, including lime green, I opted for standard silver. A boring choice I’ll grant you.

At less than £30 from SportsBikeShop, not only are Hel Brake Lines superior quality, compared with the cost of the genuine Suzuki replacement, Hel Brake Lines are half the price.

As well as a central manufacturing facility, there are also Hel Brake Line dealers around the country that manufacture brake lines to order. If you have ever wondered how they are made, you start by getting one of these …

The machine applies 12 tonnes of pressure to the fixings to ensure an effective seal. Try as you might you are never going to apply more pressure than the machine does.

I like brakes, they keep me safe, and so working on them is never to be taken lightly. Add to that, Brake Fluid damages paintwork and there is a slight whiff of trepidation in the garage as I start wielding spanners and draining the reservoir.

I opted to strip the calliper off the bike one more time to treble check everything and this time noticed that the calliper isn’t floating correctly. Only the front of the calliper was floating (moving) the rear is fixed.

This, I think is the cause of the rear brake issues. That said I have the required parts and the brake system is drained, so I decide to keep going.

The problem is that the metal sleeve is seized and the calliper isn’t moving. The bolt looks perfect, which is how I’ve missed this problem.

Having removed the rubber boot that is supposed to keep the crap out and cleaned everything and applied copious amounts of rubber grease, I reassembled the brake.

Next comes attaching the Hel Brake Line and then filling the system with fresh brake fluid. Soup to nuts, as the saying goes (start to finish) the whole job takes about 90 minutes.

Without scientific equipment, I can’t tell you the exact difference in rear brake performance. I also have to allow for fixing the problem with the floating calliper. However, the bite in the rear brake is a big improvement.

Now I can feel the difference between feathering the rear brake and applying it hard. If I step on the brake hard I can trigger the ABS, something that I couldn’t do previously.

Without a doubt, the Hel Brake Line has made a significant improvement in braking efficiency compared to the standard Suzuki brake hose, and there is one more major advantage.

While Hel Brake Lines may cost about half the price of the Suzuki replacement hose, there isn’t a service life. Within reasonable limits, the Hel brake lines do not need replacing.

I paid for my Hel Brake Lines, with real cash. No freebies or special treatment was received. I’m a paying customer the same as you.

And finally, as I’ve used Hel’s logo in creating the title image, I best get the legal bit out of the way and state that the logo is a registered trademark of HEL® Performance.