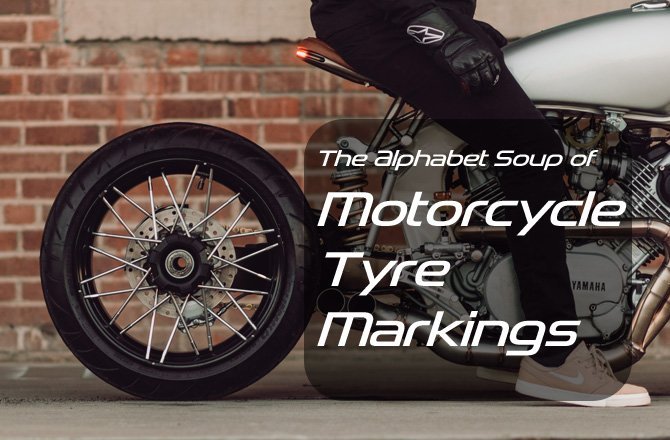 Having spent a couple of weeks gathering feedback and technical data on which tyres to put on the KTM 1090 next, inevitably we got to discussing the markings on the side of motorcycle tyres. Or in my case the 2000-word essay written on the sidewall of my Metzeler Tourance Next tyres.

Ignoring the obvious regulatory compliance data that almost goes as far as to say “This is a tyre”, most of us know how to read the tyre’s size and speed rating.

Some of us were able able to explain a little more of the alphabet soup, but when it came to explaining ALL of the motorcycle tyre markings … well, Roger is fascinated by tyres.

As to why motorcycle tyre markings are written this way, I’ve no idea, but here is how to decode 150/70 R 17 M/C 69 V, which is what it says on my tyres, along with TL and Made in Germany.

So what is the difference radial and belted? Some of the explanations I listened to, took a lot longer than I thought they might. Two things, however, kept coming up:

Radial tyres have fewer construction layers in the sidewalls because of the steel belts that run around the tyre (radially). Consequently, the radial construction allows the tyre sidewall to flex more, keeping the tyre’s contact patch attached to the road surface, giving better grip.

What were the people who wrote these standards smoking?

Whatever it was they were smoking the effects must have worn off by the time they got to this definition. If you see M/C as part of the motorcycle tyre markings, it simply means that it is suitable for motorcycle use.

The penultimate set of markings written on the side of your motorcycle tyre denotes the Load Index and a return to insanity.

I originally thought this table was translated from lbs, and that was why all the figures were unevenly spaced. Sadly, no. The numbers are just “random”.

The figure indicates the maximum weight that the tyre is designed to support when inflated to the correct pressure.

With my Load Index of 69, the rear tyre on the KTM is designed to carry a maximum of 325 KGs.

Weight distribution between the wheels on a motorcycle isn’t even. There is typically a bias towards the rear, and that is before we get on the bike and then add luggage and perhaps a pillion.

If you want to get really into the science, there are the forces that come into play when cornering, but for this example just consider the bike to be upright with all of the weight pushing straight down and a 45/55 split – front to rear – on the weight distribution.

The KTM 1090 weighs in at 235KGs, and I’m 95KGs which gives a normal rear tyre load for me of 181 KGs, leaving 144KGs for a pillion and luggage. It is worth considering that a front motorcycle tyre will normally have a lower Load Index than the rear.

This is the last of the motorcycle tyre markings. The V at the end is the speed rating for the tyre. And by maximum speed rating, they don’t mean “will run all day at that speed”.

To complicate things a little, occasional the speed rating is shown after the tyre size, in my case, this would be 150/70 VR 17 M/C 69 V.

If the speed rating is shown in brackets (V), then the maximum speed only applies at a reduced load index. You will have to go digging for what that reduced figure is.

And there are still more motorcycle tyre markings to look for. Somewhere on your tyre, you should find TL or TT. TL denotes tubeless, and TT indicates it is a tubed tyre.

The country of manufacture will also be shown. Some manufacturers use a letter which corresponds to the factory that you need to lookup. Metzeler took the easy route and wrote: “Made in Germany.” on my sidewalls.

Having worked your way through all of the motorcycle tyre markings, there is one vital piece of information missing – How your motorcycle turns.

The tyre’s width and height are often referred to as the profile – 150/70 in my case. What those figures don’t tell you though is the shape of the tyre. 150mm is the width, and the highest point of the tyre is 70% of that (105mm) tall. That information can also describe a triangle.

As motorcyclists, we are much more interested in the curvature of the tread, and there is no definition for that. I’m guessing because car tyres are effectively square.

Pirelli motorcycle tyres typically have a sharper curve than their Metzelers cousins. I’ve been told that Dunlops have a sharper profile than Pirellis, but that is a generalisation, and it will differ from tyre to tyre. Empirically though, a 150/70 will have a steeper curve and turn in faster than a 170/50 tyre.

The greater the tyre profile, the easier the motorcycle will turn and the bigger the contact patch size when lent over. The price you pay for this expanded contact patch is a nervous, perhaps even, twitchy motorcycle, in a straight line.

On the other hand, a lesser profile will give you a stable motorcycle in a straight line, but a motorcycle less willing to turn. If you have ever squared off a set of tyres, you will know the feeling. You nudge the bars, and the tyres take your request to lean over under advisement and will get back to you shortly.

A lot of research went into the size and shape of the tyres on your motorcycle. Whereas different tyre brands of tyres will give you a different feel, sticking with the profile and speed rating the manufacturer designed the bike for, has to be the best idea.

The title image is based on a photograph taken by Nick Mercer.

Bias-Ply Vs Radial image is used with thanks to Yokohama tyres.