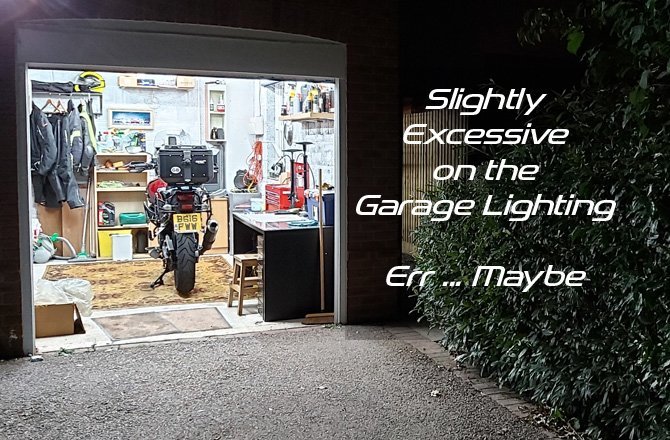 Is it possible to go too far when it comes to garage lighting?

I’d already swapped the original single bulb that was hanging from the ceiling for an Ikea special 4-way spotlight. That helped yet, I always seemed to be in my own shadow when working on the bike.

No problem, I thought. I can fix that. I’ll get one of those LED inspection lamps on Amazon. There are loads to chose from for under £10.

The inspection lamp helped, however as the lamp didn’t come with a third hand to hold the lamp for me, I’ve been spending a lot of time finding new and interesting ways to position the lamp to overcome the poor garage lighting.

Having been irritated enough to want to fix the problem, I did what most people with a problem do … asked Google.

Youtube can be very annoying, but the irritating presentation styles – which I’ll grant you is a subjective view – are a small price to pay for some of the information and “what I did” videoes.

They are all helpful. Some stimulate the planning process, while others lean more towards the “what not to do” end of the information spectrum.

In trawling through the mountain of garage lighting videos, the Barrina LED T5 strip lights were a common choice, and having bought a set I can understand why.

The LED strip lights are about a quarter the size of the traditional fluorescent strip light. They are roughly half as long, half the width and half as high, and incredibly light.

Six of the LED strip light come in the box, along with the leads to either daisy chain them together or connect each one to mains power directly. Each one of the LED strips puts out 2200 lumens for 20 watts of electricity.

I’ve installed all six, so I have 13,200 lumens of light for 120 watts. Considering the original single bulb hanging from the ceiling chord was 100 watts, that is a massive increase in illumination for very little extra power consumption.

Are they any good?

Last night I was cleaning and checking the V-Strom ready for the second visit to Scotland that starts in a few days time.

No torches or inspection lamps were necessary, there was enough light under the bike to see what I was cleaning.

It is a little thing and I’m easily pleased, but that impressed me.

I best start with a disclaimer as that is the world we live in these days. If it is necessary to print Caution Hot on a hot apple pie box, I need to impress upon you that I’m not an electrician or qualified in any way to alter electricity wiring. In fact, assume at all times that I’m an idiot.

So, being an idiot, I bought myself a new ceiling rose, removed the Ikea 4-way ceiling spot and wired in the rose. Next, my continuing stupidity connected one of the Barrina LED T5 power leads to the ceiling rose, which I then looped to the first of the strip lights.

Imagine my (heavily ironic) surprise when I turned on the garage lighting switch, the Barrina LED T5 light came on.

Inspired by my success, I arranged the lights in an oblong pattern inset from the garage wall by about two feet or 60 centimetres in new money.

The Barrina LED T5 strips weigh next to nothing, so securing them to a plasterboard ceiling is easily done with the clips and screws that come with the lights.

My only caution would be to not get to carried away with the light spacing. The enclosed interconnecting leads are 20 inches (50cms) long, but that is the total length. Subtract 2 inches from each end to allow for the leads pushing into the strip lights.

Are 13,200 lumens to much? I think not, but Senior Management has taken to wearing sunglasses when she comes into the garage. I’m sure the novelty will wear off eventually.

My colleague Roger also sends me messages, asking me to turn on the garage lights when he can’t find his keys. He lives four miles away.

Enduring such commentary is all part of the process. Next on my list is finding a way to heat the garage during the long dark nights without trebbling the electricity bills. Crack that problem and I can get some serious fettling done this winter.