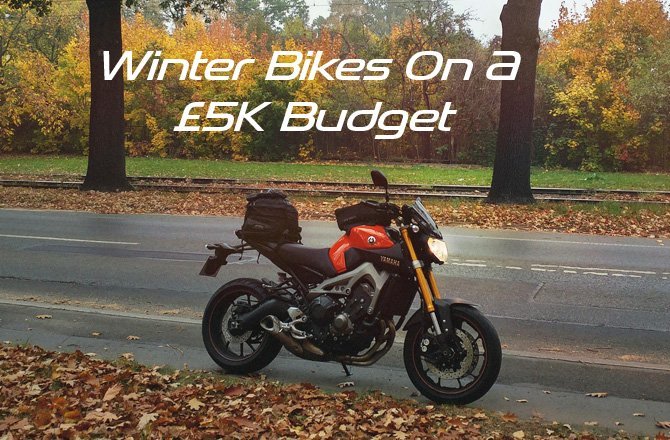 We are looking for a bike we can live with for at least the next three winters. Hence the £5K budget.

We’re not looking for a cheap hack we’ll leave to rot. We want something we can live with over a number of years. Something that comes with a warranty that will spend its summers in reverse-hibernation, ready emerge when the roads turn to crap.

This all started with our colleague Roger, who keeps his Africa Twin in immaculate condition. Last winter he spent so much time washing the salt off it and then recoating it in ACF-50, that this year it is getting laid up for the dark months.

Yet, like most of us, Roger wants to keep riding, and so the tea stop debates started over what to buy. After much scouring of eBay, Autotrader and all of the manufactures website, we thought we best set some rules, or we were never going to reach a decision.

The rules we ended up with were that the bike has to be brand new and on the road for less than £5K. Brand new means a three-year warranty for any of the niggles that might happen from a hard life.

It also has to have, engine bars and luggage, preferably a top case. If they are optional extras or from an aftermarket manufacturer, it all has to come out of the £5K budget.

Those are the practical limits, but then there is the “fill-up-factor” to consider. This is the feeling you get when you walk back to your motorcycle having paid for the fuel.

Do you casually walk towards your £5K bike hoping people will approve of your choice, or do you shuffle back to the motorcycle, visor down and shoulders hunched?

Your panel of “X-spurts” (X the unknown quantity and spurts which are drips under pressure) in this decision-making process are:

Why them? Good question. We have no idea. What qualifications do you need for your opinion to be valid? Again, no idea. Moving on …

Now, £5K isn’t cheap. This has to be a motorcycle that is a real alternative to your pride and joy. While your the love of your motorcycling life, is wrapped up for dark months and motorcycling has become more functional transport than the meaning of life as we know it, this is the bike that will be feeding our desire to ride.

Weighing in a 149Kgs dry according to the Austrians, the 390 Duke comes with upside-down WP forks, a 4-pot radial calliper pulling on a single 320mm front disc. 44HP comes from the single-cylinder motor that reportedly sips fuel.

We all agreed that the 390 Duke has the most “Fill-Up-Factor” of all the bikes. It is certainly going to get you noticed. It also has a solid reputation for being a bit of a hooligan and will allegedly put a large smile on your face.

Then again, do you want to spend your daily commute with a hooligan? Not exactly what we are looking for on a cold winters day, but assuming it is dry — Why not?

Thankfully it is also available in white, should ginger (sorry orange) not be your colour.

Just to be different from their Austrian cousins, the Germans prefer to quote the weight of the BMW G310R fully fuelled and road-ready.

Subtracting a tank of fuel and some oil from the BMW figure of 158KGs, and we arrived very close to the KTM dry weight figure.

Not all that surprising when you consider how close the rest of the specifications are. Single-cylinder engine, upside-down forks, 300mm single front disk with a 4-pot calliper.

Where the specifications differ is in the power department. From the 313cc motor, BMW release just 34HP, down 25% on the KTM.

If there was a bike we couldn’t get excited about it has to be the BMW G310R. None of us can tell you why we just look at it and are unmoved. It really is the bike you buy would buy with your head, rather than your heart.

For us, it doesn’t really have an individual style. There are traces of KTM to go with the “when I grow up” looks of the other BMW Roadster models. Beauty is a personal choice.

OK, hands up, really we shouldn’t include this bike. We had to go to the 2019 model to get the base price under £5K and then there are the extras. Suffice to say, if you call Chris Walker Kawasaki, you might, just might, get lucky and come in under the £5K budget.

For your money you get a 399cc parallel twin producing 45HP and 38 newton meters of torque. To stop the Kawasaki there is a single semi-floating 310 mm petal discs on the front married to a dual piston calliper. On the rear is 220 mm petal disc.

The extra cylinder adds to the weight, with Kawasaki opting to quote a curb weight of 167KGs. As to what is included in a “curb weight”, no one seems to be too sure.

Gorgeous in green the Z400 definitely has that “fill-up-factor” without the bike looking like it wants to start a fight.

Asked to choose between the KTM 390, the BMW G310R or the Kawasaki Z400, Billy opted for the KTM 390 Duke. Dave and Roger would have the Green Machine and Carle bought a KTM 1290 Adventure S (seriously!).

When told this wasn’t a valid choice, he reluctantly opted for the Kawasaki as the best of the three.

And that we thought was that. Three votes to one – Go buy a Kawasaki Z400 by calling Chris Walker … Then an email arrived from Sinnis, introducing the new Sinnis T380 Adventure.

On the Road Price, £4,750, and that price includes full wrap crash bars and three-piece aluminium luggage – Ready To Ride £4,750

First, let’s get the elephant in the room dealt with. The Sinnis is made in China, by the same company that also makes parts for Suzuki and BMW.

So where the motorcycle is made means nothing – how it is made is everything.

So far we can only look at the press pack. The Sinnis T380s arrive in the UK in October. Even so, as a value for money proposition, the Sinnis T380 Adventure is hard to argue with.

Three-piece aluminium luggage, full wrap-around crash bars and £250 change from our £5K budget. There are twin wavy disks on the front with radial-mounted callipers, along with a single wavy disk at the rear.

Then there is the awesome colour TFT dash and if you look just under the MPH letters, there is the Bluetooth symbol. We are guessing the T380 will pair with your phone, but exactly why, we are not sure. GPS turn by turn indications would be the dream; a display showing who is calling is perhaps more likely.

The liquid-cooled, parallel-twin, single overhead camshaft engine pushing the Sinnis T380 along, coughs up 37bhp at 9,000 RPM and 35 Nm of torque at 6,500 RPM, putting it above the BMW when it comes to power, but slightly short when compared the KTM or Kawasaki.

Until we can have a good look at one, the only thing we can see that we would choose to swap are the tyres. As standard – according to the press pack photos – the T380 comes on Timsun Nylon tyres. Hmmm. They should last for ages, but nylon isn’t known for its grip in the wet.

The full height screen is a welcome touch. We are looking for a bike we can live with through the next three winters and for certain this will involve rain and lots of cold rides. Yes, the screen is certainly a nice touch.

We will have an in depth review of the Sinnis T380 for you, a few weeks after the bikes arrive in the UK.