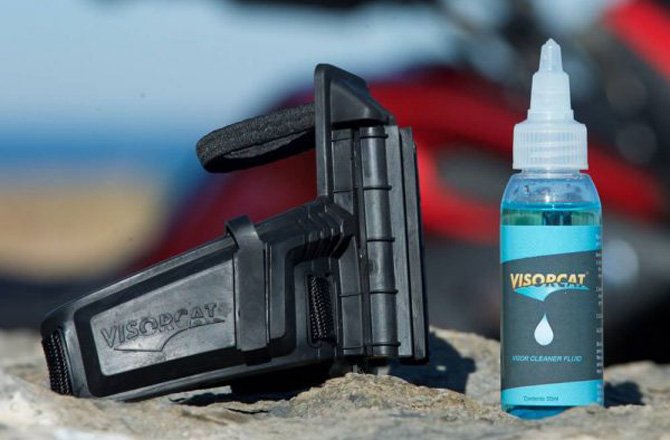 If you are riding this winter or riding in the rain at any time of year, you need a VisorCat. It really is that simple.

VisorCat is a wash/wipe attachment that goes over your left-hand glove. The simplest description would be “its a sponge and a wiper blade” but that is not doing justice to the ingenuity of VisorCat’s designers.

Designed and made in the UK and shipped out of Scotland, if you are riding while the weather is turning to custard, then the VisorCat is a massive advantage.

Rather than using the edge of your glove and ultimately scratch the heck out of your visor, VisorCat provides a better method for keeping your visor clear.

Wipe across your visor left-to-right. The flap protecting the sponge lifts out of the way, so the highly absorbant sponge and cleaning fluid can lift the road grime and rain off your visor.

Now wipe back right to left, the flap covering the sponge closes, and the twin wiper blades on the VisorCat remove any residual fluid and rain from your visor.

The result – A clean and clear visor

Whereas VisorCat will work with just water, there is a cleaning fluid that makes VisorCat more efficient. Manufactured by Shift-It for VisorCat, the fluid is recommended by helmet manufacturers because it contains no harmful ingredients such as salt.

You wouldn’t think that COVID-19 would have an impact on keeping your visor clean and clear. While the supply chain is reorganising itself, VisorCat is selling the Streetfighter version of VisorCat which comes without the washing fluid.

For a short period, the fluid wasn’t available in the quantity that VisorCat preferred and so created the Streetfighter version.

With everything now back to normal, the Streetfighter had proved so popular it has been kept as an option. However, if you do decide to go with the Streetfighter and replace the VisorCat fluid with something different … choose carefully. There is more to it than screen clean from the local garage.

Scratches on my Visor?

About the worst thing you can do to clear your visor is wiping it with your glove. That is an almost guaranteed way to scratch your visor as you push the road grime on to the visor surface and drag it across your field of vision.

That is what the sponge on the VisorCat is there to prevent. The sponge and the fluid lift the grime from the visor as you wipe left-to-right. The return wipe, right-to-left then clears away and smears left by the sponge.

I run a Givi Airflow on my V-Strom. Whereas the screen can be described as “fugly” there is no getting away from how effective it is at deflecting the air.

The oasis of calm there is behind the Givi Airflow doesn’t stop the rain covering my visor. Until I started using a Visorcat, I had to stick my head out either side of the screen, to get the wind to blow the raindrops off my visor.

I do sometimes wonder what the people behind me must have thought I was doing. So, screen or no screen. Naked or adventure bike. Do yourself a favour and get a VisorCat.

In addition to having stockists around the UK and Ireland, you can also order directly from VisorCat via their website.

If you do order direct use the code FLIES at checkout, and those nice people at VisorCat will give you 10% off.

For the avoidance of doubt, I bought my VisorCat with my own cash money. I’m a user and a fan.

Categories: Touring
Tags: clear visor, visorcat
There is 1 comment for this article