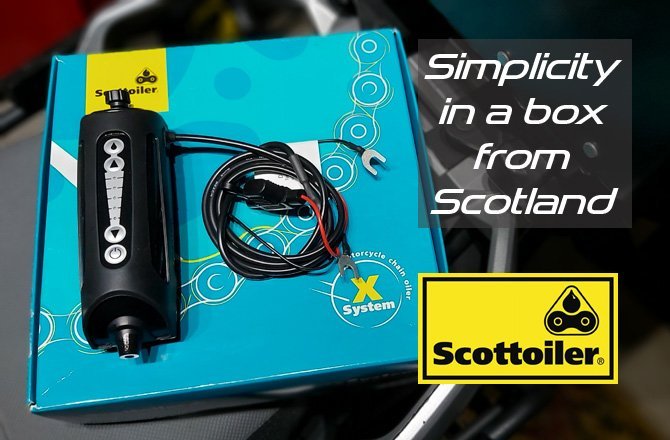 Halfway around the first of this year’s Scotland tours, my Scottoiler xSystem gave up the ghost and I was lamenting not having a small can of chain lube with me as a backup.

At the time it was annoying but these things happen. My xSystem Scottoiler was more than 3 years old and had served me for over 20K miles, in all weathers.

This is the first Scottoiler – of the 5 I’ve had on various bikes – that has ever given me a problem. Perhaps I should have stayed with the vacuum-based variant, but the simplicity of the xSystem was very hard to argue with.

Having bought a can of chain lube and returned to the habit of spraying the chain every couple of days, I’ve been trying to convince myself that I didn’t need to replace the Scottoiler.

Yea – Right. Who am I kidding? Once you have had a Scottoiler there is no going back. They are brilliant, and my replacement reservoir has now arrived from the Scottoiler warehouse in Glasgow.

Let’s get the sceptics dealt with first. I paid for my Scottoiler with my own money and I paid for all of the previous Scottoilers I have owned.

So why did I give up with chain lube and switch back to the Scottoiler?

Scottoilers could be described as the lazy person’s way of keeping the chain lubricated, and yes I am lazy. Anything that removes the need to grovel around on the garage floor, works for me. All I need to do it make sure the Scottoiler has oil in the reservoir and the rest is taken care of.

Whereas lazy is good, the biggest reason for installing a Scottoiler has to be chain life.

After switching back to using chain lube I noticed that I’ve needed to adjust the chain three if not four times over the past few months. Something that when the Scottoiler was running was a very occasional event.

Ideally, I would have noted the mileage and tracked the need for chain adjustment scientifically. Sadly, as I wasn’t expecting any difference, I haven’t done any of that.

Having taken a few knocks on the head in my life, my memory may not be the most reliable source of information. However, as I’m essentially lazy, I’m sure I would remember wheedling spanners in pursuit of that perfect chain tension and there has definitely been more of that lately.

But it is only oil

Thankfully, on the topic of what to lubricate your chain with, Ryan who fronts the FortNine Youtube channel did apply the requisite scientific principals when it came to a study of chain lubrication.

Spoliers: The end conclusion is that gear oil is the lubricant of choice. And having now spoilt the revel for everyone, here is the video. It is well worth a watch.

Is Scottoiler Red or Blue oil the same as gear oil? I don’t have the knowledge to answer the question. However, Scottoilers are designed to use Scottoiler oil, and oil is the best motorcycle chain lubricant.

Therefore it seems logical not to mess everything up by putting the wrong type of oil in your Scottoiler?

If you require more convincing as to why you need a Scottoiler, try this.

The xSystem is powered from your battery. The only connections you need to make are the power leads to the positive and negative terminals on the battery.

The xSystem knows when your bike is running and only then does the pump inside the xSystem reservoir start pushing oil through the system.

The longest part of replacing my Scottoiler was remembering how I routed the power cables to the battery. I knew the route I’d taken before, and I’d just removed the old cabling, but repeating the route was fiddly.

That was as difficult as it got. Total time to replace the Scottoiler was 45 minutes. I’m not sure I can think of any way Scottoiler could make it any easier.

It is true that installing the Scottoiler reservoir is only half the job if you are fitting a Scottoiler for the first time. Running the oil pipe to the rear sprocket is pretty much the same as routing the power leads. The majority of the time is spent working out what route to follow, the actual installation only takes a few minutes.

Why don’t you own one?

I can only think of three reasons not to have a Scottoiler fitted on your motorcycle.

One: You own a shaft or belt drive motorcycle and have read this article waiting for the opportunity to say “…because I ride a GS / Harley”. Your moment has arrived. Enjoy.

Two: The ritual of escaping to the garage for some essential motorcycle maintenance is your excuse for some “me time, with the one you love“. This emotion I can completely understand. Yet, there are better ways to spend garage time than lubricating the chain.

Three: Because you are about to purchase a Scottoiler and have read this to discover which one you need. For you good people, here are your choices: 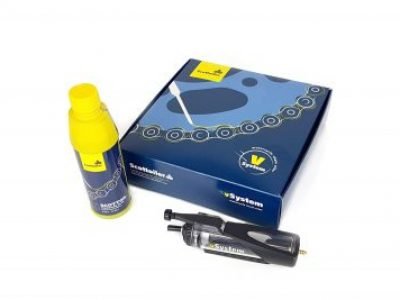 vSystem – The most common and well-loved version of the Scottoiler. It uses the vacuum created by the engine sucking fuel into the engine to open the valve in the reservoir which then allows the oil to flow.

Stop the engine and the Scottoiler valve closes and the oil flow stops.

The oil flow is gravity fed, so the more upright the reservoir the better. That said you only need a 15-degree slope, so don’t worry if you can’t mount the reservoir vertically. 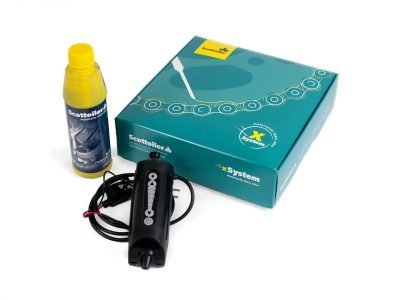 xSystem – Rather than being gravity fed, the xSystem has an electric pump and senses engine vibration so it knows when to start pumping.

It is arguably the simplest to install – not that the others are difficult. Connecting two wires to the battery is a task even I can manage. Once connected you have a five flow rates plus a priming setting to choose from. Setting three works well for me, with four reserved for long rides in the rain. 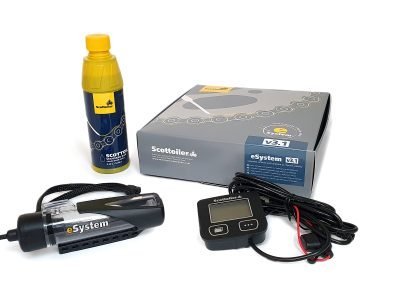 eSystem – Similar to the xSystem in that it has an electric pump. The eSystem comes on when your motorcycle starts to move thanks to the vibration and movement sensed through the triple-axis accelerometer.

The eSystem has a handlebar-mounted multifunction display and control unit, through which you can set up different flow rates, check how much oil is in the reservoir and a number of other clever things.

Which One is Best

Good question. My V-Strom uses an xSystem, while the Africa Twin with the traditional gear boxed has a vSystem installed. To complete the set, the DCT Africa Twin runs an eSystem, and yes, we all paid cash money from our own pockets for these.

As all of the Scottoiler models do an excellent job, why did we all pick something different? A very good question.

Anyone know a good psychologist?