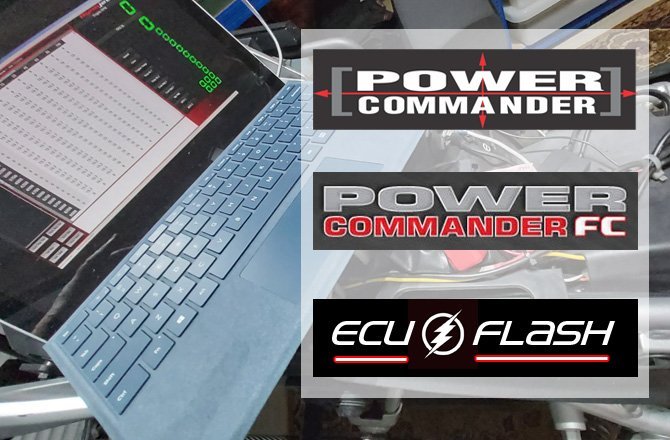 It is incredible how a sequence of simple improvements to my V-Strom has led me to the point where either, flashing the ECU, fitting a Power Commander or the Power Commander Fuel Controller is the next logical step.

I wasn’t looking for more power – I rarely use all that I already have – yet with each small improvement I’ve highlighted an area where the standard out of the factory configuration is a generic compromise that can be improved upon.

It is unfeasible for manufacturers to hand tune each bike and in a way, I’m glad they don’t. Where would the fun be if we couldn’t tweak our motorcycles to suit our individual desires?

It all started so innocently with the replacement of the stock air filter with one of the superb K&N variants.

K&N air filters can be cleaned and reused, unlike the strangely expensive stock Suzuki ones. The K&N air filter is more expensive when you first purchase one, but in the long run, they are cheaper than using the standard replacements.

Next came fixing the highly frustrating “backpressure bung” that I could feel when getting back on the throttle.

Imagine that each time you roll off the throttle, some of the exhaust gas remains stuck in the original silencer. Before the bike will accelerate cleanly, these leftover gases, need a good shove to clear them out.

I’m sure there is a technical term for it, but “bung” is the best description I could come up with. I cured this by fitting a Delkevic end can – you can read that story here.

Those two simple modifications transformed the V-Strom from a good bike into something that is a joy to ride.

Doesn’t matter if I’m making progress through the traffic in town or pushing on through the country lanes, the bike is smooth and suits my way of riding which is more about flexing the mid-range torque, than bouncing off the rev limiter in search of the maximum BHP available.

While having a thoroughly enjoyable time touring around Scotland, I was riding with a colleague who spends most of his time on a DCT Africa Twin.

Annoyingly every time we stopped for fuel, I would be putting in 2 or 3 litres more than him. The maths are not exact, but I would roughly estimate I was using a litre of fuel more than him, every 50 miles.

The fuel consumption as reported by the Suzuki ECU indicates 43 miles per gallon when the V-Strom is lugging me, the top box and the two large Givi Trekker panniers about. The roads were typically the type where we were rolling on and off the throttle in 3rd and 4th gear for the V-Strom, and whatever Mr Honda thought appropriate for the DCT Africa Twin.

One imperial gallon is 4.54 litres. So if my maths are correct, I was using 5.25 litres every 50 miles, while the Africa Twin was burning 4 litres. After pressing a lot of buttons on a calculator, I came up with the Africa Twin averaging 50 miles per gallon, which my colleague says is about right (I can do maths, me).

After about seven hundred miles of the tour, I noticed I done a lousy job of sealing the joint between the catalytic converter and the link pipe when I fitted the Delkevic and where the exhaust was blowing, the soot on the pipe was jet black.

Catalytic converters – “Cats” – work best when they get up to temperature and typically that is in the 400-450 degrees centigrade range, or ‘kin hot to you and me.

If the exhaust gases are burning that hot and can still leave a soot mark on the exhaust and I’m getting disappointing few miles to the gallon, my logic is that the air filter and exhaust changes have messed up the fueling and the V-Strom is running rich.

Having concluded that the fueling needed to change, I appeared to have two options open to me, the Dynojet Power Commander 5 or Power Commander Fuel Controller commonly called the “PCFC”.

That was until I called Parkitt Performance in Tuxford.

The ECU on several of the models in the Suzuki range can be reprogrammed, unlike many other manufacturers who lock the factory fitted ECU and only permit factory-approved modifications.

The internet is littered with downloads to program both types of Power Commander. Every bike is different, and not all riders want the same result. So, with Internet downloads, it is a question of trying them out and seeing what happens.

The sure-fire way to get the result you want is to have your bike run on a dyno and have the Power Commander mapped to your specific requirements on your bike.

The only difference between that and an ECU Flash is that for me, the changes will be made directly to the Suzuki ECU, which can always be reprogrammed to standard if required.

It isn’t a job for the faint of heart, plus I don’t own a dyno. I’ll leave the technical part to Tony at Parkitt Racing who has been mapping road and race bikes for many years.

As I mentioned back at the start, I’m all about mid-range torque which the V-Strom has lots of. What I would like fixed is my lousy fuel economy. Outright BHP at the rear wheel isn’t something I’m looking for.

The V-Strom is booked in at Parkitt Racing in a few days time. I’ll let you know how it goes.