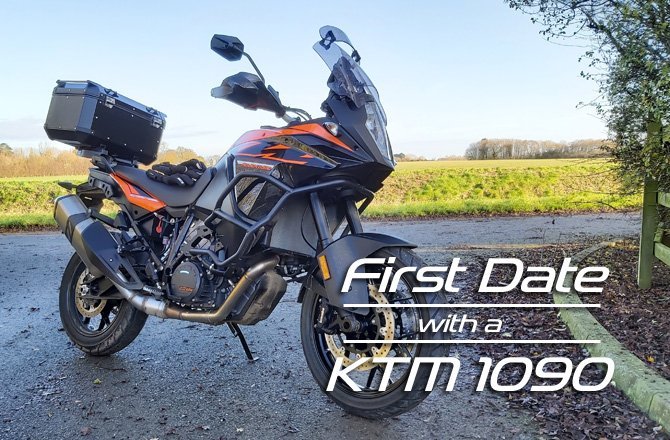 Following a chance encounter on the internet and the shameful exchange of money, I bought a KTM 1090 online, without seeing it. After it was delivered some seriously lousy weather put an end to any thoughts of a first date. Instead, the KTM and I had to make do with a weekend of getting to know each other in the garage.

It should have been a short first meeting, but thanks poor quality control on the Kappa Engine Bars, the garage romance lasted much longer than was originally intended.

With the desire to spend some quality time together still unsatisfied, the welcome sight of dry – well sort of dry – roads, led to a quick cup of coffee and a hasty breakfast, before departing in the sunny but chilly 3°c morning air.

First dates are a heady mixture of expectation, high hopes and worry, especially considering my desires all came from riding a KTM 1290.

How was it for you?

Thankfully, having spent the money, I was impressed. The handling is sharp, the engine revs freely, and there is enough power to get on with things, without having to grab handfuls of throttle.

Sometimes referred to as the “poor person’s KTM”, the 1090 is missing some of the refinements that the other models have as standard.

The IMU is the standard variant, none of the fancy 6-axis science has been applied. There are “just” three rider modes (Sport, Street and Rain). Add traction control and ABS to the mix and that is your lot. There isn’t even a “fag lighter” or auxiliary power socket as we are required call them, since we all stopped smoking.

A centre stand, heated grips, spotlights, LED lights, quick shifter and all of the other enticing extras are missing. Whereas that could be annoying if you are all about the bling, it does give you a good excuse to spend hours on eBay looking at bike parts, which is exactly what I’ve been doing.

Considering that only the rear shock can be adjusted, KTM has pretty much nailed the handling “out the box”. My KTM 1090 is still running the “fake” Metzler Touratec tyres it left the factory with, but the damp and occasionally mud-covered roads of Lincolnshire didn’t present them with any problems.

The KTM is a vibrant, willing, mad as a box of frogs, collie dog with its favourite ball or a mile muncher, whichever you prefer.

Having ridden 20,000 miles on the V-Strom, I’d come to expect a resounding clunk as I selected first gear. Next came that awkward pause as I disengaged first and went looking for second. Once the decision was made though, second gear arrived with a reassuring thud, and we were away.

A V-Strom’s gearbox is not the most refined. Bulletproof they certainly are and in need of direct management rather than finesse. In comparison, the KTM gearbox only needs a light touch and a little encouragement to move smoothly between the cogs.

The lever travel between first and second feels a little longer, but the gearbox wants to play along and with its slick changes are continually urging me to keep pushing on.

If I had to pick one stand out difference between the KTM1090 and the V-Strom it would be the work rate of the KTM 1090’s motor, compared to the almost lazy approach of the Suzuki’s. Both satisfy my need for forward momentum, it is how they get me there that differs.

The V-Strom was all about handfuls of mid-range torque. When I wanted to be – let’s call it motivated – I would get a progressive, continual push onwards. Changing up, way before the red line, I would happily be offered another shipping container of torque and with ever-increasing momentum, the V-Strom would propel me forward.

The KTM is much keener to get me where I’m going. As soon as I open the throttle, the KTM is eager to deliver, encouraging me to ask for more. I don’t think I will ever find the KTM 1090 suggesting I slow down and take my time. Getting into trouble would be very easy.

Most of this rampant desire to go faster comes from the choice of gearing. When riding on feedback alone, I arrive at roundabouts, in a gear higher than I expected to. The speed and engine note that would have been second on the V-Strom, comes from third on the KTM.

On a first date, these little things stand out. No complaints, it was all good, and honestly, shame on me for thinking about previous motorcycles when out with a new one.

I could also have been kinder to the KTM and avoided the mud covering some of the Lincolnshire back roads, but I was having way too much fun for that. And as we have established, I have no shame.

The second date is something I’m very much looking forward too. Before that, though, there is more time to be spent in the garage, getting to know each other better.

The GPS bracket and wiring happened last time, along with those irksome Kappa engine bars, which were troublesome to fit without some garage engineering – but that is another story.

This time there is a Meta DefCom Thatcham Approved CAT1 Alarm to install. The Defcom takes the standard KTM immobiliser and adds the extra parts to upgrade the system to Thatcham Cat1 standard. The KTM 1090 and 1290 are prewired for these. It should be plug and play after removed the plastics on the rear to get to the connectors.

Which then leaves the main stand that I’m hoping will come up on eBay for a reasonable price, the radiator guard which is on backorder and the Scottoiler System from the V-Strom, which needs a tweak to the nozzle holder slightly to make it fit perfectly. Excellent fun.

Now, all I need are some drying roads …