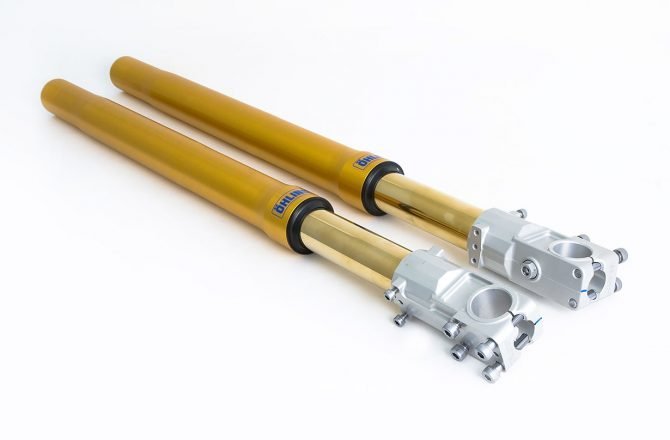 We change the oil in our motorcycle’s engine regularly. We all know it makes sense. The metal bits in the engine spend all their time rubbing on each other, so keeping them lubricated is vital. As the oil does it’s magic; it gets heated up, put under pressure and eventually need replacing.

At 15,000 miles I’ve changed the oil and filter on the V-Strom three times already and by the end of today, it will be four. In all that time the front forks on the V-Strom have been sealed tight.

I can’t claim to understand all of the technicalities of motorcycle forks, those engaging humans at Parkitt Racing at Tuxford near Newark know a lot more than me.

My understanding of the internal workings is limited to the knowledge that the oil in the forks, along with the internal valves, is how the rebound and compression damping are controlled.

The springs in the forks provide support the weight of the motorcycle and rider as well as helping to smooth out the undulations of the road surface. When braking, the fork springs compress to absorb the force created by the weight shifting forward.

The old oil is on the right

Without damping the spring in the fork legs would bounce like a pogo stick. For example, as the forks compress under braking the fork oil is pushed through a series of valves to give you gradual compression – hence, compression damping.

When the brake is released, the springs in the forks want to expand and to ensure the forks expand in a controlled manner the same oil goes through the rebound damping valves.

The oil in the forks is moving back and forth with every bump, ripple, change in the road surface, and while the engine oil has had three changes, the fork oil in the V-Strom is the same stuff they fitted at the factory.

Fork oil is sophisticated stuff. Along with the base oil, there are all sorts of additives (polymers) mixed in to make the oil last longer.

Eventually, though, the oil breaks down, the viscosity changes (thickens), the polymers turn to carbon and starts to form sludge. Interesting the oil also becomes more acidic, but the killer point is the thickness and sludge that sticks to the moving parts inside the forks.

Looking at the oil that came out of my Suzuki V-Strom forks after 15,000 miles, it was time to have the forks, stripped, cleaned and rebuilt with fresh oil. As the forks were apart, I also opted to replace the seals and the nylon spacers at the top of the fork internals.

Of course, all of this is academic, if I can’t feel a difference.

The easy answer to that question is yes, I can; the front end of the bike is much smoother and on the default factory settings is much firmer. I will need to make progressive adjustments to the pre-load, rebound and compression damping to get it exactly how I want it. There was no point in copying the old setting and instantly expecting a better ride. The old settings were for the old oil and clogged up fork internals.

Servicing motorcycle forks may not be sexy, but it is well worth the effort. After all, we wouldn’t ignore an engine oil change for 15,000 miles.