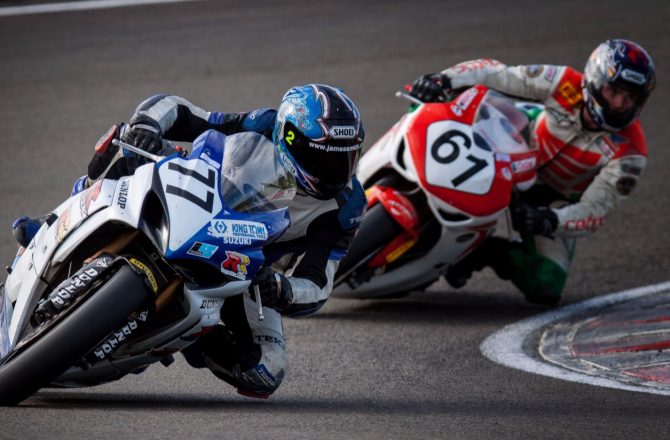 Getting your knee down. One of the iconic claims to riding a motorcycle. Working on the simple basis that repetitively trying, and falling off in the process, was going to be both expensive and hurt, I decided to book myself on to i2i Motorcycle Academy’s “MC3” course, which is known better by its nickname “Knee Down Training”.

And while we all worked on that, Tom Killen, our instructor worked on removing the destabilising influences that your riding style has. Those little things that we perhaps never think about, but adversely influence how the bike behaves.

Ever thought you could make a 180-degree turn in sixth gear, at 20 mph with the throttle closed, using only one hand to control the bike? I wasn’t too sure either, but when you are shown how it isn’t as difficult as you might imagine.

By the way, if you are worried about scratching your pride and joy, don’t be, all of the training uses i2i’s Triumph 675 complete with extra-wide crash bobbins.

To get your body in the required position so that your knee kisses the tarmac requires some flexibility. The other riders on the course came in a range of shapes, sizes and ages, and to a greater and lesser degree, we can now all add “knee down” to our list of motorcycling achievements.

A gentleman referred to as “Blipper” by his friends was perhaps the most successful, once Tom Killen had persuaded him to stop moving about on the bike so much and calmed his use of the throttle.

But why learn this skill? I’m not going to try this on the Lincolnshire roads, assuming I could find one without potholes.

I’d signed up for the course to improve my corner entry technique, and this was a safe and highly enjoyable way of exploring all of the dynamics of cornering in a one day course. Getting my knee down on the day was the result of the course, not the objective. The fact that I reached the absolute edge of the tyre and could corner successfully at that angle with the power balanced and the bike driving through the corner is simply the outcome of improving my cornering technique.

Having found an excuse to ride for a couple of hours the next day, I noticed my control at corner entry and through the corner was noticeably improved. The transition in and out of a corner is much smoother, mainly due to me no longer adversely influencing the bike.

What I had been doing was interfering with motorcycle’s natural tendencies to do what I was asking the bike to do, and as a consequence creating a problem, I then tried to fix.

But did I get my knee down I can hear you asking? Yes, and more than once in both directions, although I found it easier turning left than when turning right. Bragging rights? Well, a few I guess, but most of the credit goes to Tom at i2i Motorcycle Academy for an outstanding day’s training.