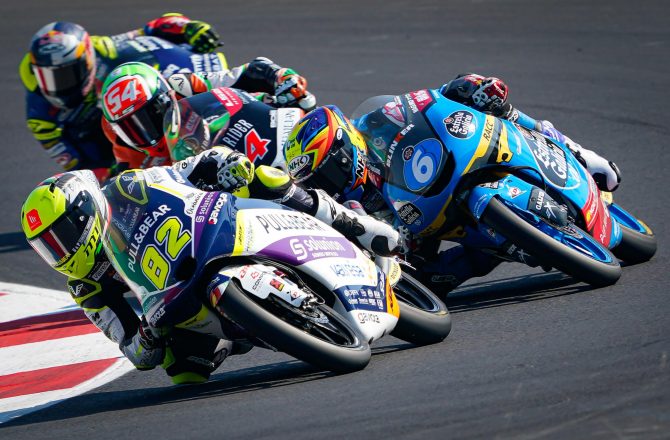 Motorcycle racing is exciting stuff. Be it, MotoGP, WSBK, IOMTT or even your local club race, there is something about motorcycle racing that pushes it beyond other forms of motorsport.

Perhaps it is the limits that motorcycle racers are constantly testing. Whether it is lean angles, the size of the gap needed for a pass or the closeness of the competitors, it looks impossible, yet there it is right in front of you.

Having the most skilful riders though doesn’t always equate to great racing.

Over the past few years, World Super Bikes had acquired a reputation for being boring. Gone where the heady days of Carl Fogerty on the Ducati or Colin Edwards battling with Troy Bayliss. Their 2002 season end race at Imola is on Youtube – amazing stuff.

Until recently, the Kawasaki ZX10R in the hands of Johnny Rea was all but unbeatable. Johnny Rea would demonstrate his uncanny ability to corner aggressively on “cold” tyres off the start line and build a lead through the first few corners. After that, the race would mostly be an outstanding display of race management, until the chequered flag fell.

For the purest, that is racing. For me, it wasn’t exactly engaging. Amazing riders with 200+ HP motorcycles, racing on a world stage, and yet it was a bit dull.

And its not just WSBK

MotoGP is top of the circuit racing pile and is nearly always worth a watch, even if it is for the antics and characters rather than the actual on-track racing.

I’m a fan and I’ll watch and enjoy the spectacle that is MotoGP, however …

This past weekend (early September 2020) the winner of the MotoGP race was decided off the start line. There were stories to follow throughout the race – whose tyre was going to go off in the final laps, the then championship leader folding the front and crashing out, twice – yet sustained close racing didn’t really feature.

In need of my racing “fix”, something to get me emotionally engaged, I started watching the SuperSport Races, that accompany WorldSBK. The screaming 600cc bikes were certainly running closer.

It could be argued that Andrea Locatelli riding for the BARDAHL Evan Bros. WorldSSP Team has dampened the SuperSport season this year (2020). So far he has been utterly unstoppable, winning every race, typically with a very comfortable lead.

No one I can recall has ever won every race in a season. Not even Marc Marques, the GOAT or Stoner has managed it.

Agreed, as I write this it hasn’t happened yet, but this coming weekend – 19/20 September – if Locatelli leaves Catalunya with a lead of 100 points or more, he will be champion. And his main rival is out through injury.

Watching history being made is always interesting. If it happened again next year, then it would be getting boring. Behind Locatelli, the others are going at it hammer and tongs, and thankfully the TV director focuses on that, rather than the lonely Locatelli, riding on his own.

And so to Moto3

For me, the recipe for emotionally engaging, edge of the seat, getting invested in the action rather than just watching it, racing is …

All of which leads me to Moto3. The series that Charlie Cox, when commentating for the BBC would describe as “a bunch of axe murders”. Very politically incorrect, I’m sure, but it got the point across. The racing is intense.

And yet this all comes courtesy of a 250cc single-cylinder engine. There are two engine manufacturers to choose from, despite what the label on the side of the bike might say, and the same goes for chassis. Again there are a couple to choose from, but after that, there is little or nothing to choose between the bikes.

To make the difference on a Sunday morning, teams add a highly motivated rider, keen to impress as the world watches, and hour upon hour in the garage extracting the last ounce of performance from the bike.

It can be argued that this is what every race team does. The difference with Moto3 is that if you find a 5% improvement, you don’t find so much that you will dominate the series or the racing.

Look behind you, and there will still be ten or fifteen other riders tucked in your slipstream.

If you have never tried a Moto3 race, then I urge you to do so. I keep picking them at random from the back catalogue of races and I’m yet to be disappointed.

Categories: Road Riding
Tags: moto3
There is 1 comment for this article