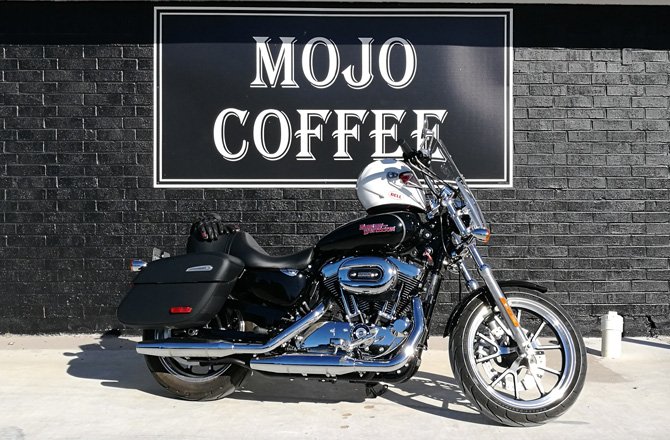 When life took me to Texas for three months my first reaction was – oh hell, three months without a decent set of bends. My Versys 1000 will be locked up in the garage at home, while I’m in the land of never-ending straight roads.

I wasn’t going to do my time in Texas without a motorcycle to ride and I soon got to know Kate at Eagle Rider in Irving near Dallas.

Kate was a fascinating lady, and it was Kate who told me not to even think about trying to hire the solitary BMW GS they had in the rental dealership. The GS was there as a favour to a guy who hired his bike out when he was away working. But Kate was having none of my European based arguments, I was leaving on a Harley, and there were no two ways about it.

At this point, I was stuck. I had no idea which Harley I might like or what any of them were called. Some of them look so massive I wondered if they even moved.

Soft tails, baggers, bobbers, glides, and what I think was a low rider with a screen which I ended up choosing. Of all the bikes it looked the most like something I was going to get on with.

With all the paperwork sorted, all I needed was somewhere to go and thankfully, when in Texas, it is “compulsory” to visit The Alamo in San Antonio. Added bonus, The Alamo was 300 miles away and with two good routes available, one along Interstate-35 and the other more of a cross country route on US-77.

First though, I needed to break my Harley Davidson duck and ride the damn bike.

If you have never ridden a Harley, we need to talk about the gearbox. There is nothing wrong with it. It works the same way most other motorcycle gearboxes do. What you need to be ready for though is the change from first-to-second.

First gear engages with a resounding clunk. Add in a few revs, let out the clutch and you move forward. There is a lot of torque and a tall first gear to match it. All good so far.

Then you change into second, and there is what seems like an overly prolonged pause while the selector shafts do their thing. Next comes a small explosion and a resounding bang, and then you find yourself in second gear.

With my first upshift, I thought I had broken the Harley. Or perhaps it was out of oil. Or maybe the world had ended. One of those three had to be the answer. Yet, there were no warning lights, and the Milwaukee motor was once again pulling like a train. The next traffic light was red, and I can remember being reticent to change down. Considering the noise changing up, what was going to be like, changing down?

I wimped out and came to a stop in second.

Pulling away from the light I was prepared for the cosmic event that was the first to second shift. With a slight grimace on my face, my left foot asked for second gear, and once again the thunderclap of a gear change occurred, and we were way.

Thankfully, the impressive if confusing arrangements of Interstates and dual-lane roads around Irving quickly deposited me and my Harley riding colleague from the office, Jose – out of town and heading south. On the Interstate – I still want to call it a motorway – the Harley was delightful.

At motorway speeds, the Harley is smooth, despite the thumping 73.2 cubic inch V-Twin motor (1200cc) that was pushing me along. It was easy to float from lane to lane as the traffic commands.

In Texas, there isn’t the concept of an outside lane when it comes to overtaking. Choose your lane on the Interstate, and pass other vehicles on the left or the right depending on what else is going on. There is still a natural tendency to prefer the lanes closer to the centre for overtaking, but being able to pass either side does keep the traffic moving.

Despite the fluid overtaking rules traffic still backs up and at the first traffic jam, I default into filtering mode and start picking my way through the traffic. The low centre of gravity and the bucket loads of torque make it a simple enough task, but I notice that Jose wasn’t following me.

At the next coffee stop, Jose explains that in Texas, whereas under-taking is perfectly OK filtering isn’t. It is going to be a hard habit to break, but I don’t relish the idea of explaining myself to a traffic cop.

The rest of the trip to The Alamo passes without incident, although I do notice that the Harley is thirsty. Or is it that the 1200cc motor and the peanut of a tank gives the impression of the Harley drinking fuel. How do I convert US gallons into litres? Then again, “Gas” is cheap in Texas, so why worry.

Despite the long open roads, it took longer to cover the 300 miles on the Interstate than we had planned, and we arrive at The Alamo shortly before closing. At least I can say I’ve been there. Discussing Harleys with Jose over dinner that evening, I come to the conclusion that they are not for me.

They are loads of fun, are the very definition of their sector of the motorcycling world and if you have never ridden one, you absolutely should. However, but I can’t quite get myself to wanting one. Just not my thing.

I could grind the pegs on every corner, because of the ground clearance, not my ability. The gearbox would irritate me, and the (perceived) fuel consumption at European prices would bankrupt me. It takes me three hours to fully clean my V-Strom, with all that chrome on the Harley, there would be no time left for riding.