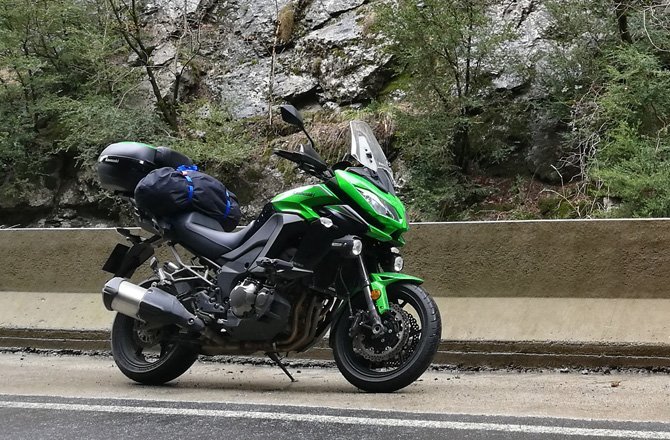 Scrolling through Twitter this morning, I read a post from Matt (@matchroomboxin) who came up with the idea  of a simple game – “What is the best motorcycle-related gear you’ve bought?” Something that was an absolute bargain.

There are only two guidelines to the game:

My entry would be my much used, abused, still going strong, totally waterproof, 60-litre QBAG I purchased from SportsBikeShop for a crisp ten-pound note. Yes, £10 of my own money!

I bought the QBAG to replace the aesthetically pleasing but not exactly functional panniers that came fitted to my 1050 Tiger. The Tiger panniers also weighed the same as a small shipping container, and the seat height exhaust meant that the back pocket of my jeans had more usable space than the right-hand box.

Three years later SportsBikeShop are still stocking the QBAG. Even better, and despite being worth so much more, it is still only a single crisp tenner.

Two occasions stick in my mind that justifies the waterproof claim. The first is last years ride to the Portsmouth ferry, which from where I live is about four hours. The rain was biblical that day. Noah and the animals passed us on the A34, level of rain.

The second time was a year earlier when riding magnificent N-260 across northern Spain and the rain was a constant irritation, all day long. It would throw it down. Stop. Drizzle. Sunshine and then throw it down again.

Both times, not a drop of H2O made it into my QBAG and I revelled in the delight of dry socks when reaching that day’s destination.

The keen observers will have noticed the upgraded straps in the main photo. These were £3 from a motor accessory shop. The ones that came with the QBAG, I decided not to trust at motorway speeds.

So in fairness – my nomination for Best Bargain Motorcycle Gear is a 60-Litre QBAG and extra straps for a total of £13.