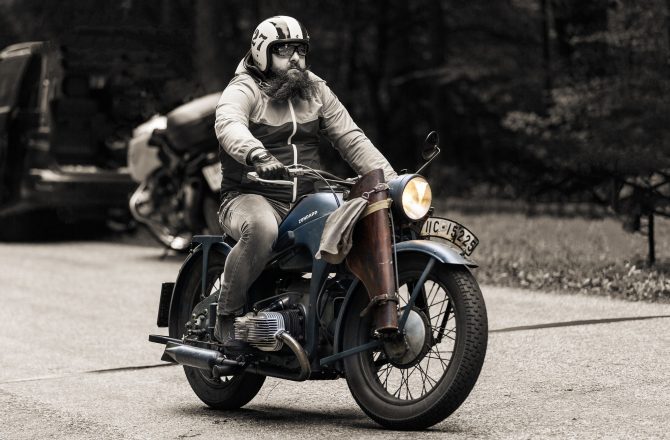 After a few weeks of delivering prescriptions to those who can’t or perhaps should not be venturing outside at the moment, it is starting to feel familiar.

I didn’t ever imagine I’d be back “despatch riding” after something like 30 years. I was a student with a motorcycle for transport back then, and it made sense to earn a few quid in between lectures. This time it is totally voluntary, either helping my local pharmacy or the Royal Volunteer Service (GoodSam) with deliveries.

At face value, the idea of delivering prescriptions all seemed straight forward. Collect prescriptions. Check the seals on the packages, so I can’t get things confused. Make sure they all have address labels. Go deliver. Simples! Well sort of …

I found out quickly that I didn’t know my home town anywhere nearly well enough to make deliveries. I’ve had a love/hate relationship with my TomTom Rider 550, but I can’t fault it when it comes to door-to-door navigation by the most expedient route. It’s even better when my intercom joins in and plays the directions into my ears. (Yes, I should have bought a Cardo)

I’d never thought about Postcodes before. They are just something everyone has. In the UK our postcodes are made up from a primary and secondary group in the format – “XX12 3YY”. Pretty much the first four characters will always be the same when delivering for the local pharmacy. I occasionally get a different primary postcode, and I allow myself a small smile when I do, as it means a slightly longer ride.

The key to efficient deliveries appears to be the first character of the second group.

If I group all the deliveries with the same first character in the second group together, I cut down the mileage between drops. It isn’t foolproof – I know, I was the fool that tested it – but it stops me crisscrossing town and getting strange looks from the locals.

There are some bizarre driving habits are going on at the moment.  I have followed people driving nervously at less than 20 mph. It is almost as if they are expecting something strange to happen at any moment.

Alternatively, they may have just had an encounter with the other type of driver, the one who isn’t expecting to slow down for anything and is fully invested in the lack of traffic that would otherwise impede their rapid progress.

More than once I’ve watched as “they” have shot through a junction, or come out of a side turning, clearly not expecting anything else to be on the road.

Having arrived at your first drop, you might want to consider who you are delivering to. Not everyone is going to be relaxed about seeing you on the doorstep, and unless you fancy taking your helmet off 20 plus times a day, best to use a flip front so that people can see your face.

If you don’t have access to a flip front helmet, those lovely people at SportsBikeShop (Luke to be exact) suggested …

Click on any of the helmets for more information

There are of course Shoei, Schuberth, Bell and others, but while appreciating that this might be a short term investment for some, SportsBikeShop went for the easiest way to get you in a flip front helmet.

And to avoid any misunderstandings, I’m not involved with SBS in any way other than as a customer.

I have an uncanny ability to park near drains. I’m also paranoid and of course tempting fate by even mentioning this, but you can see where I’m going.

A spare key for the bike and the top box in my jacket will save me from a long and embarrassing walk across town in my gear, to collect my spare keys.

Until recently, there were cafes, garages and even the infamous public loo for us to use. These days, most if not all of these loos are no longer available when the need arises. Go easy on the caffeine and consider your … err … “current circumstances” when delivering close to home.

Conversely, stay hydrated, and if you can work out the balance between those two, please let me know.

And that is it. Strange suggestions for strange times. Take what you need and ignore the rest. I hope some of it helps.

Oh, and one final thought, oil your top box lock.